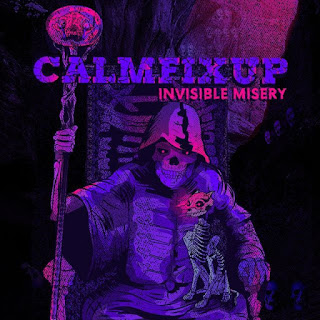 
The more I listen to the rock albums of my comrade in West Coast Avenging, Calmfixup, the more I feel like his singer-songwriter journey is a story of building emotional armor. His first album The Last Time I Start Over is this naked cry of the last moments of youth saying I’m still confused, I’m still figuring life out but I’m gonna be confident about it going forward.

His new record Invisible Misery is like Tony Stark built his armor – the lyrics are less nakedly vulnerable than the last album but they’re still honest, just with more craft. Meneses (the alter ego secret identity of Calmfixup) is a great singer who never falters but something I keep hearing from people is they want the vocals on these records louder.

Sonically, TLTISO reminds one of Smashing Pumpkins and Nirvana while IM reminds me of the Beths and A Perfect Circle. Listening to his singer-songwriter arc over the years, Calmfix is like a petri dish of rock paradigms – it sounds to me like he has all the styles mastered and he gets to deploy them to express his own particular brand of thoughtful and plaintive poetry. The sound is bigger and more confident than ever before. The songs are catchy as hell from “Dubious” to the chill and hypnotic “Belle”. “Tad” is ominous, “Fell” is wonderfully poppy. The whole album is that strong albeit a bit brief – it’s a melodic tour de force with smart rhythm as ballast : witness the misery.

Tristan "Tanjint Wiggy" Acker is a staff writer for Zus Entertainment, a Jooseboxx and Untapped Hip-Hop contributor, and member of the Inland Empire, California based nerdcore hip-hop group the West Coast Avengers