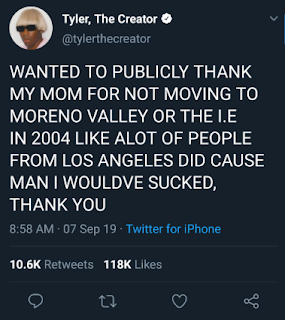 It’s hypocritical to yap about Reagan all the time and then leave poverty out of your analysis of the I.E.

It’s wild how we love to give rappers passes for stuff we don’t give anyone else passes for.
Jokes about how ghetto the Inland Empire and San Bernardino are about class, about making fun of
people who struggle economically, don’t have pristine environments and struggle with poverty. 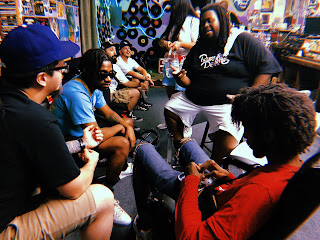 As the word “ghetto” finally fades into tackiness, people look for other ways to make fun of people that
are poorer than them and for some Southern California residents, “San Bernardino” or something like it
are shorthand for that. This is why it’s important to educate people about social justice, socioeconomics
and numbers more broadly: it’s not like it’s a city of people who decide to be poor or “ghetto” or “dirty” or
“shady” or whatever: statistically over ⅓ of the population of San Bernardino is actually literally living in
fucking poverty. Half of the city is receiving government aid of some kind. People who run cities and
municipalities have to look at a region’s “taxbase” in other words, who is paying the taxes to fund a
government and a society: when half of your people are on government aid and ⅓ in actual life or death
struggle with real poverty then you have a very small taxbase to fund services and make things better
with. This isn’t hard to understand. But some people still want to joke about Sanbernaghetto like a bunch
of people just decided to make a shitty city.

There’s a lot to factor in: a city slow to take advantage of the potent cannabis economy, going through
bankruptcy, high rates of violent crime. In the last 35 years the Inland Empire has lost jobs at Kaiser
Steel in Fontana as well as military-base shutdowns in Moreno Valley and San Bernardino and these
are cited as the biggest factors in discussing the last few decades’ poor economic performance for the
region. During the recession we were hit particularly hard and were slower to recover. Countless people
lost their homes in Fontana, Upland and Cucamonga around 2008 and left to cheaper Bernardino,
Moreno Valley and Rialto in the decade since. 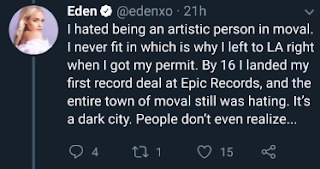 That’s something I don’t get: American media is so obsessed with both the stories of races co-existing
and post-industrial towns economic situations. The Inland Empire is all of that and more than most
places but still it is dismissed as dismissible, forgettable, “ghetto”, meth-ridden. It’s almost as if lots of
activists, media figures, corporations and more that say they care about minorities and quality of life for
the unfortunate do not actually care.

Ta-Nehisi Coates, who wrote the famous Atlantic Case for Reparations article in 2014, talks a lot
about how the dominant American narrative has always indoctrinated us to think that people of color
invite their challenging circumstances with particular short-comings in work-ethic, “family values”,
“strong male role models” etc. but all studies show that when you factor in structural barriers to normal
healthy economic and family life installed into the superstructure of our society by centuries of white
supremacy and imperialism, black and brown people are not intrinsically less likely to work or be there
for their kids or have good values etc. So to bash areas like the Inland Empire full of impoverished
brown people working their asses off is to victim-blame. When rappers like Tyler or Jay Z or whoever
dismiss poor people and poor areas firstly it’s not a coincidence that that is the area that they chose to
bash and secondly, it’s part of the same right-wing white supremacist ideology espoused by the old
white guys pictured with Reagan people are always meming about, the same philosophy that birthed
Trumpism, the post-Paul parts of the Tea Party movement.

This is not to say any rapper that says shit like this is a war criminal in the class struggle but rather
just to say be aware of this train of thought’s origins and context. Realize when framing is causing you
to elide class in your analysis of something. 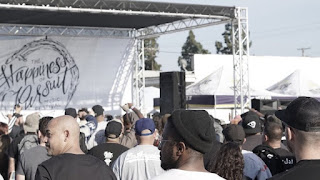 What does all this have to do with hip-hop?

Personally it doesn’t bother me that much that bigg-ish rappers say stuff like this from time to time.
I’m even starting to like it because it helps me find other social media accounts of people that live in the
I.E. but what does bother me when I see people co-signing the bashing of the Inland Empire because it
reminds me of how ingrained into us hatred of the poor is by American culture. It’s one thing to say it’s hot
or to complain about the struggle but I disagree with comments about the area or its people being
intrinsically uncool or whack and I object to comments about “it’s bad for creatives/we don’t support
creatives”.

Imagine going to the home of a family that is hungry and criticizing them for pirating music online or not
having nice enough art on their walls. That’s what it is to say the I.E. doesn’t support its creatives: yeah
Mo Val, San Bernardino, and many more have major economic issues, why wouldn’t support for the arts
be part of that context? That’d be like a city being on fire and you kept complaining about this one random
part of the city that’s on fire as if the rest of the city wasn’t on fire.

Anyway yes: there is less city by city support in terms of dollars for the arts in the I.E. than in an area like
Long Beach that is both more affluent and staffed by city leaders that prioritize a more progressive vision
of culture and the arts. Because so many people are struggling economically, it’s harder for artists to
make a living off of solely a regional customer base. Harder but not impossible granted. But in terms of
the people? In terms of the talent?

It’s just wrong to say there’s not opportunities. I’m from San Bernardino and the proximity to San Diego
and Los Angeles and my own diverse area has allowed me to achieve a healthy amount of my artistic
goals and has since given me as much of a platform or shot as I could ask for to try to tackle the rest from.
If someone wants to show me how per capita (controlling for population) compared to x, y or z region
there’s less opportunity, given the economic context I’d be very open to such an argument but to say
there is no opportunity and that “people don’t support each other” is factually incorrect. 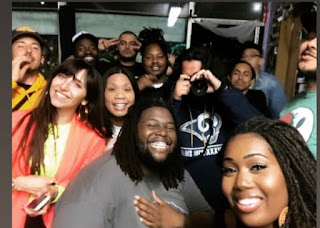 Given the economic challenges of the Inland Empire, people should be amazed at what HAS been built: the Common Ground, a massive legacy continues, THOPFest, Punch Line Kings battle league, a cannabis friendly record store venue in Serious Cartoons and way more….this is just the stuff that’s still happening right now.

Stop twisting it in your head to something that it’s not: the I.E. is a region with talent like many others
and it’s also a region with massive swaths of impoverished people. These are two distinct categories
but these identities intertwine, so when people try to dismiss and then people try to say you’re crazy
because you’re feeling a certain way about it just remember your correct feeling of there being something
wrong about such dismissals is you knowing deep down that this is all part of the only argument that ever
really mattered: the one about valuing all humans regardless.

Stop twisting it in your head to something that it’s not: when they dismiss the I.E. they are spitting on what
they perceive as lower-class people. Class struggle is real and social media and the internet allow people
to tell on themselves about whose side they are on; we’re not haters for keeping note on when people
reveal themselves.