The Politics of Bandana by Freddie Gibbs & Madlib 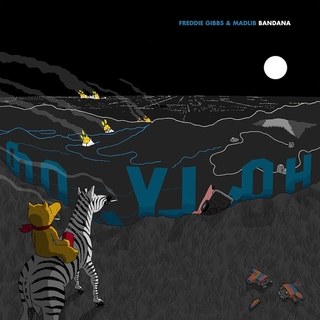 Freddie Gibbs and Madlib’s new Bandana, the sequel to the already legendary Piñata is remarkable in a lot of ways but one is the depth of political commentary in Gibbs’ stories, in comparison to the first record in the series. In songs like “Flat Tummy Tea” and “Situations” he refers to Jeff Sessions, Obama, Bush and more that have been involved in lawmaking that affected him or the characters he raps about.

In “Flat Tummy Tea” he says
Obama can't make the law retroactive, what the fuck
happened?

Congress cock-blockin' niggas from comin' home to they family If you lucky, when he left out of office You got a pardon, overtime cut


This makes me think…Gibbs probably would not agree with young leftists that say there is no difference between the two major political parties or even given actors within the parties: here he is describing a situation where the small difference between two possible versions of a law meant the difference between the protagonist getting out of incarceration or staying. The Obama administration was always pushing for more reforms than the Republican congress would cooperate in delivering and here Gibbs explains point blank how that affected him. Per Genius.com, Gibbs says he was locked up when he wrote this so I suspect this stuff somewhat applied to his situation.
On “Situations” he says
Motherfuck Jeff Sessions, I'm sellin' dope with a
weapon

Only union some of me and my niggas got is the Western I'm they favorite rapper when niggas fucked up and they stressin' Lot of niggas feel like I got my bucks up and I left 'em Tell them pussy niggas come get the fuck up on my level, yeah This how it feel to wake up and you don't owe nobody shit Not an explanation, not no conversation, Drug Administration, suck a nigga dick

Again, he isn’t just saying “fuck all the politicians…” despite references in his songs to having been arrested on the day Obama was elected. He is saying fuck these Republicans- almost as if he knows the right-wing administrations tend to seek harsher penalties and set up the more draconian frameworks in the first place.

The specificity of the bind the protagonist in Bandana finds himself in is one of its innovations in relation to Piñata; a friend of mine, notorious tweeter Wavy Jones said he thinks Bandana is more of a Gibbs record whereas Piñata felt like more of a collaboration. The depth of the story telling in Bandana backs this I think, it’s like Gibbs is letting us, the listener, in more and learning about some real shit. Worth paying attention to, I think.
Tristan "Tanjint Wiggy" Acker is a staff writer for Zus Entertainment, a Jooseboxx and Untapped Hip-Hop contributor, and member of the Inland Empire nerdcore hip-hop group the West Coast Avengers
at 9:45 AM Labels: articles, blog, blogger, blogs, freddie gibbs, jooseboxx, madlib, reviews, Tristan "Tanjint the Wiggy Woo" Acker, write-up