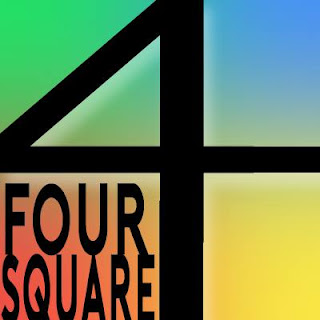 This year we wanted to do something different at the end of the year than just more reviews, profiles and video round ups. We wanted to add a little retrospect and creativity to the pieces so we're putting our year end content under the banner of The Wrap Up. To start off 2017's Wrap Up, we bring you the first installment of a series that will explore album covers we like, 4square. We're getting quotes from the artists and the visual artists they teamed up with for their album covers about some of our favorite releases from 2017.
In this series, we're asking musicians and the visual artists that helped them with their album art for quotes and stories about the covers to their records. I'll add a little commentary and perhaps on occasion some additional relevant imagery. We haven't failed to notice that our readership has tripled in the last 2 years and we want to reward y'all for that with some fun content, so thank you for reading as always! 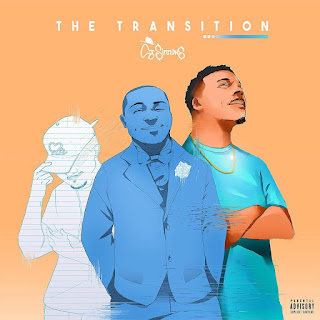 King Dice Says: CJ Simmons' The Transition is the first major release after rebranding in early 2017. Simmons (formerly Young Jig) visually displays the transition of what can be interpreted as a boy to a man, an artist journey of self-discovery, or even in the grander sense of life as the simple act of being alive can be described as a series of transitions. On the far left we see an unfinished flat sketch on notebook paper; invoking memories of childhood school days. The first image transitions into a visibly taller and now more refined image with more detail and shading, but keep in mind the second image has an important "piece" of the first image stationed right over the heart (please see Young Jig's Open Heart and Black Heart projects for more information). The second image gives way to the most complete of the three figures now complete with color and sporting a more confident pose signifying CJ's newfound comfort in his artistry under the new moniker. Ultimately a sense of growth and evolution are obviously being broadcast through the art with excellent execution.

K.I.T. on the album art for Transition: "For the Transition, the artwork was a far cry from previous work I had done with CJ mainly because the focus was on him instead of the concept of the record at hand. Compared the single artwork for Be Free and Pina Colada, the Transition is an artistic rendition of not a theme, but a quality I had gotten to observe over time. The proudest moment I had taken apart of was Jig's wedding day and I've never seen him more in his element. So as the gradient of drafting increases from college ruled lined paper to a final digital render of the man himself, the middle ground where he made a commitment to the woman he wants to spend eternity with felt like the middle ground with which he will stand upon, regardless of the hardships he'll most certainly encounter in changing his moniker. That cover basically drew itself to be honest haha." 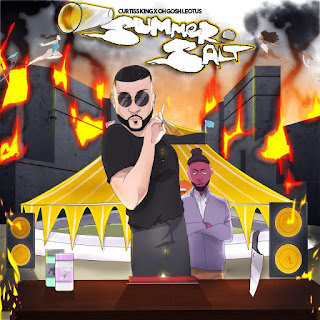 King Dice Says: Curtiss King remains a powerful force in California's music scene. Anyone who has followed his career can attest to the level of talent on display in each project, from production to the flow to occasionally singing. With that being said, King has publicly announced Summer Salt would be his final foray into releasing projects as a rapper. His most recent album cover shows Curtiss sprinkling what could very well be the Summer Salt itself onto a dish he's preparing very much in the vein of Turkish chef Nusret Gökçe aka #SaltBae. Producer of the project OhGoshLeotus can be seen in the background seemingly looking on in disapproval. This entire scene happening in front of a circus tent, complete with flying trapeze artists, surrounded by a world on fire. It seems King has become a maser of his own destiny and managed to use the same Summer Salt described in the project's opening track as something he can now use to his advantage as opposed to being controlled by its effects. All the while the world is falling apart around him and the only part not burning is literally, and I'm assuming quite figuratively as well, a circus. 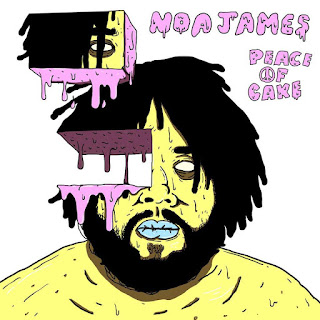 
King Dice Says: Noa James' Peace of Cake is, in my humble opinion, a project responsible for giving us many of the Inland Empire's underground POSI anthems for 2017. You're taking the aggressive style Noa James is widely known for, motivational messages, super dope beats (see Orca de Tres Leche, and Serman Chocolate Cake). and mixing it all up. The cover we get for this project is a zombified Noa James who seems to have turned into a cake and is giving us, the listener, a piece of him. We are getting a piece of his "brain" as he shares his thoughts, a piece of his eye as he shares his vision, and a there is much more to be given. Simple but compelling. 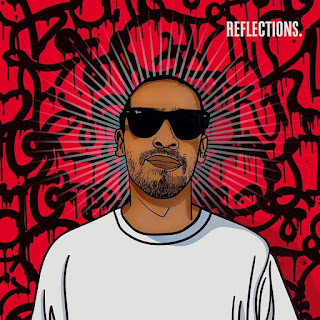 
King Dice Says: Ital Santos' Reflections' is the only instrumental album to make my list for this article. The cover has striking imagery that I instantly connected to. Growing up Catholic in Southern California, I couldn't help but instantly see the resemblance to the painting "Virgen de Guadalupe". Maybe its the pose, maybe its the rays of light emanating from behind Ital's head, whatever it is... it is captivating. When coupled with the project's title Reflections The sense of being God or in control of one's fate is apparent. Ital has a sort of tradition of religious iconography and imagery being present in his work (see the cover of his Sermones project), Reflections continues in that tradition. I've always viewed the image of rays coming from behind a person's head in illustrations as meaning having a message from God and maybe Ital shares that sentiment with this project as it's content being a divine message to be shared with the world.

Ital Santos on the album art for Reflections
I finished the album first... I sent [iNanz] a picture of me and the album. told her to do what she do

inane about Reflections: Ray Ban eye wear was the fun part. It evolved from there. The vibe. I noticed his eyes are something he hides.