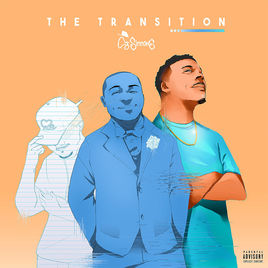 With The Transition, CJ $immon$ has delivered a really nice album to help end the year with- pristine, positive, intelligent but accessible it is some grown folks hip-hop but that doesn't mean boring by any stretch. In fact the straightforwardness of the album is refreshing- smooth 21st century style hip-hop production from the always outdoing himself OhGoshLeotus and pockets and flows and musings on life for days from Simmons.  He uses his team well but still knows how to seize center stage. His voice is at once husky and young, his energy is a delight to follow.

K.I.T. provides the artwork as well as some lovely choruses on several song. Leotus gives the album a consistent sound while still showing off his eclectic arsenal of funk, melody and bass. Cam Archer and Young Sincere are used to great effect on their appearances. Both singles, "Pina Colada" and "Be Free" are effective and fun ads for this life-affirming album.
It's hard for me to find anything to not really dig about the record- it's musicality, it's set of good melodies, its repping of the IE to the 9s (pun intended), its celebration of working class grit and the prioritizing of family. Simmons' verses on love and his hopes for the future generation show a focus that shines in a way that demands ones' attention. Some say this may be Simmons' last project, I suspect it isn't. This album doesn't sound like an ending but quite the opposite.