It Was The Realest Shit He Ever Wrote: Review of Ital Santos' Decem 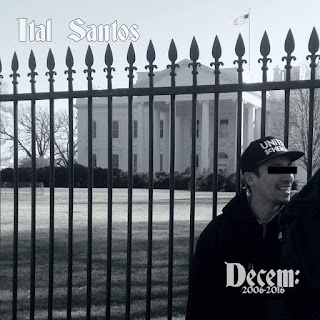 Ital Santos, the artist formerly known as Jynxx, recently released a well-curated collection spanning the first ten years of his career called Decem. Meditating on it a few times over a few months makes me think deeper on his double album The Transition. I always thought of the title as referring to the time in his life and his mindstate while creating the album but now I realize much of his career reflects the transition that West Coast Rap itself was going through in the first decades of the twenty-first century.

The music community in Cali was going through a Transition that Ital correctly identified- transitioning away from the dominance the 90’s held, transitioning out of losing 2pac and more broadly, moving beyond the Gangsta Rap narrative that had been dominant up through the late 90’s and the end of the century. Ital never lost sight of the idea that older cats go through these things for the benefit of the youth, so that they don’t have to.

You can hear the cultural Transition throughout Decem. The older tracks bristling with a little more trigger-happiness and aggressive masculinity. Their pre-track shout outs sound Death Row-style and Yasin, a frequent Santos collaborator on the earlier works, throws down hard bars over powerful and grimy boom-bap. The later tracks are more chill and even stoner-hippie in their wizened observations and wisdom. Noted posi-gawds like Noa James show their earlier more gangster side on older tracks from the collection too: again, the Jynxx / Ital Santos Transition reflects the larger cultural shift, here is a musician who has been here for all that. Songs in between like an addictive R & B number, "Black Brown Soul Revue" sung amazingly by CornBreeze near the end help show Ital’s diversity and vision.

The record's given me a new appreciation for how Ital develops choruses- 'Realest shit', 'Crisis', 'All for the money', 'Rain Check' and plenty more show his understanding of the interplay of the sung soul sample and the rapped refrain but more importantly they are catchy and give his music an enjoyable momentum.  More recent tracks include standout performances from Slick C, D'zyl 5k1 and of course a frequent Ital collaborator Mando the DJ on the cut.

Santos shows us his part in local lexicon development with tracks like “the 9”, and the collection’s standout almost-closer “The Realest Shit I Ever Wrote” on which he says "I got friends but sometimes I feel alone." The whole song is a bluesy soul slapper which encapsulates, I think, Ital's desire to shed light on the struggle of people in the I.E. This record commemorates a decade of him doing exactly that, through different collaborators, different eras and personas of the self, just trying to give the I.E. the kind of musical shading and texture so many other hard-up communities have had in the past. He's been busy in this last decade and I look forward to what he produces in his next.