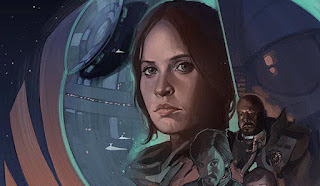 *STRAIGHT UP SPOILERS AFTER THE FIRST TWO PARAGRAPHS, FAM*

Rogue One is one of the least flawed Star Wars films and will probably ultimately be assessed as one of the best films set in the GFFA (Galaxy Far Far Away) thus far. It doesn’t overtake Empire or even Jedi or A New Hope for me but it was probably a little better than Force Awakens. Episode 8 can retroactively strengthen (or weaken) Episode 7 so it’s not even a fair comparison.

The soundtrack was a tasteful blend of Star Wars style new stuff and careful reprises of the original theme. My girlfriend said the beginning was less exciting without the conventional horn fanfare text scroll combo and I’m inclined to agree. I fully understand it’s not one of the “episodes” but I still think they should have worked a version in somehow.

Rogue One actually delivers on the edgy twist-on-the-familiar film Suicide Squad advertised itself to be. None of its core and new characters surviving, its story actually depicts a suicide mission- more akin to a war film than a comic book one, and that’s no shade. I’m more into comic books than war films but this was still a bold angle to follow through on. In recent weeks as Vulture and other entertainment journalism outlets reported on Tony Gilroy’s extensive rewrites and reshoots, I was getting to be certain Disney was ordering the edge be taken off the film but whatever compromise was hashed out the final product balanced being a fun Star Wars movie with being a war movie separate in ways from the core Episodic Star Wars series.

Tarkin’s return was weird but cool. Not sure why they didn’t do the same CGI resurrection with the actor who played Dodonna. Vader shouldn’t use puns but it was a consistent through-line with the corny humor we saw Anakin employ in the prequels. It was also awesome to see Vader’s castle on Mustafar though I wish the film would have just labeled it “Mustafar” the way it did literally every other planet depicted. Mendelsohn served just fine as an aspirational but still ultimately evil Imperial officer.

It seems like what got cut the most in reshoots was the “I, Rebel” stuff, Saw Gerrera, and Vader scenes. There’s just a lot more implied about them in the trailers than is delivered on to say nothing of the decade plus jump between Gerrera’s second appearance in the movie and Jyn’s adulthood. We may never see that stuff but I suspect we will.

What the new Star Wars films are doing with morality is incredible. The exploration of the Rebels' extremist factions as terrorists along with Phasma’s relative prominence in the First Order and the diversity of Imperial staff in this film, Disney is making the Empire less racist and the Rebels less blameless. The two new Disney Star Wars and the Rebels television show have been notably full of Force users that don’t necessarily identify as Jedi: Kylo Ren, Maz Kanata, Snoke, Ahsoka, even Rey and Luke, and now Chirrut. This can’t be a coincidence: Disney for some reason is interested in using Star Wars to explore religion and morality as spectrums and that idea is worth watching as a through line in their larger Star Wars Story. 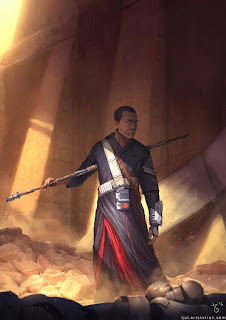 The way the film leads right into Episode IV is irresistible so a day or two after seeing R1 I popped in A New Hope and it was very enjoyable to see the adventure continue relatively seamlessly. Vader’s costume details being perfect in Rogue One paid off even more so upon watching '77 SW. Watching it now reminds me of X-Men comics about the original 5 once you know Xavier has had other teams that died but as much of a downer as that sounds like, it enriches the heaviness of “war” in the films if that makes sense. You understand more than ever that for so many in the galaxy, these events are high-stakes.

The word is that Rogue One’s opening weekend sales are disappointing compared to Force Awakens. I hope the bean counters at Disney realize that Force Awakens had the benefit of being the first theatrical Star Wars release in 7 years, the first live action Star Wars release in a decade, and was full of established fan favorites whereas Rogue One was the second annual SW release and didn’t have Han and Chewie zipping around in the Falcon in it. Most of the upcoming “A Star Wars Story” films, movies not set as “episodes” in the “main” series, are starring favorites with Han Solo and Lando confirmed and rumors of Obi-Wan, Boba Fett, and Yoda movies. I think we’ll have to see how those films open before  declaring the non-episodic Wars films less worthy of Lucasfilm’s trademark extravagant budgets. Being honest, that’s all that’s at stake here- if Lucasfilm thinks the ‘ASWS’ series is less profitable, those projects will get less budget and maybe even ultimately discontinuation so they can still put out the Episodes every two years with more demand in the public for it.

Don’t let there even be a chance that Yoda movie doesn’t get the budget it needs, get your ass out there and see Rogue One! Kidding; honestly, if they continued the ASWS line but with smaller budgets thus leading to smaller more intimate character-based films that might not be the worst thing in the world.

Still, if you’re even a casual Star Wars fan, don’t sleep – Rogue One is super fun. That said, maybe leave the youngest of kids at home as there is even more death than usual in Star Wars films, the war aspects are a lot more explicit and the tone is often just darker than the “normal” SW films. Enjoy and May the Force etcetera!