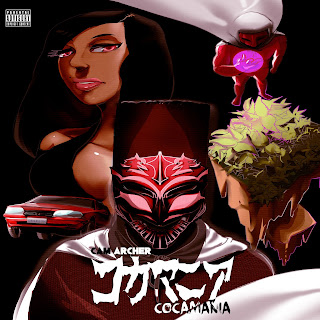 MC Cam Archer and producer OhGoshLeotus’ 2016 release, Cocamania, is a timely brew of nerdcore hip-hop and futuristic electronica from Cali’s Inland Empire. Leotus’ smooth keys, crisp drums and soaring synths professionalize the hell out of the Sober in Stone x Sober‘s already standout songcraft and MCing. I’ve been known to call Cam Archer the “best enunciator in the I.E.” but this record shows how he is already more and reveals his potential as beyond even that. I used to be put off by the content of his work – braggadocio about sexual conquest and being doper than you – until I heard the whole record in-depth which illuminated a hunger, an earnest expression of both a dark side and a desire for success and life’s finer things. Yeah, I want loftier topics but I’ll take someone honest about what they want from the world over another wannabe third-eye-open rapper any day and given the chance Archer gets Shakespearean with it.

"Will Smith with a Carlton Complexion..."
True to hip-hop’s roots as a way for folks in forgotten urban decay zones to create a rhetorical armor for themselves, the San Bernardino-based Archer speaks on everything from getting into comic books as a youth, feeling suicidal, seducing MILFs on carnival cruises, doing shrooms and hanging tough with his crew. He raps about using his darkness and anger for fuel, of being overlooked and of being the best.

Leotus and super-talented singer / vocalist K.I.T. help Cam paint his soulful and electronic picture of the I.E. almost as Freudian avatars: OhGosh as the id and K.I.T. the ego to Cam’s super-ego. Seemingly tightly structured rap songs will become electronic meditation jams with K.I.T.’s melodic narration of Cam’s inner-dialogue gradually being spit at comparable double-time to Cam’s own flow. It’s a rewarding development of what the verses are on the surface aided greatly by the fact that all the stops were pulled out as Leotus crafted the crystal clear sound engineering and production layering of this record.

Cam is quick to dismiss the uncool kids and whack MCs as he reveals his own duality: the idea of "mania" is both a play on the kind of fan reaction performing artists hope to engender as well as a kind of psychosis that can affect the sharpest artistic minds, like Archer, haunted by the non-stop nature of a poetic consciousness. The idea of “Nirvana” as something desirable but also melancholy in its elusiveness. Archer says this duality can be compared to Hamlet- to be (responsible), or not to be? To be (someone who lives up to their obviously great potential) or to be a hedonist? Or why not both? In Archer’s Inland Empire…these are the questions.

"Down in the Dino they know I'm the shit"
I have to admit a bias against songs that propagate materialistic fantasies but “5.0” is presented in such an earnest way it’s hard to resist it. Not only is the beat a banger but the song is still grounded in the Inland Empire and is charmingly honest about the speaker’s desire for many of life’s finer things. This is counter-intuitive but the more I understand the sincerity of this theme in Inland Empire originated music, the more okay I am with its repetition.

"Don't get caught in the life"
"Springyard Nights" is a chill masterpiece with smooth yet hard-hitting rhymes and a killer bassline. OhGoshLeotus produces the majority of the album and his influence on the quality of the project cannot be overstated: he brings to the table a professionalism and sense of melody that would help any serious artist produce a good album. Archer does not waste this, fully embracing the I.E. Odd-Future potential of blending his airtight spits with singers like K.I.T. and Natalie Sings over Leotus’ electronic explorations of funky yet soulful synths and rhythm. Even lighthearted songs like “Sailor Moon” turn new leaves mid-track into melancholy piano droplets- Leotus and Archer reminding you they have much to show you and limited time. Like the best moments of Channel Orange which it reminds me of, the album’s sound is a remarkable and catchy blend of nostalgic tunefulness and hard-hitting modernity.

The formula is consistent but never boring- much of the time Cam, K.I.T. and Leotus sound like a band, attacking each song from their respective angle. “Let Me Know” is a chill and introspective reprieve that says more about Archer’s persona on the album than the girls the character speaks to. “Darkhaired Girls” is a nice continuation of the chill begun by “Let Me Know” but more epic and R&B inflected, riding off of the turn of the century-based sample from “Better Off Alone”. The closer “Good Night & Good Luck” is a standout, stepping up the energy and double-time, interrupting the more relaxed second half of the album. The final track, an 8-bit romp with fellow Over Everything member C.J. Westley with production from Leotus, is a fitting blend of the smart flexing and nerdcore that represent the record.

"Tight Rope Balance / Flying Grayson Talent"
What is the Cocamania? Archer says “C.O.C.A.” is “Chronicles of Cam Archer”. When asked if that combined with the comic book style cover art (also by K.I.T.) was Riddick-inspired, he explained that it’s more about vulnerability. So what is the the mania?  Ambition tempered with insecurity? The inability to be vulnerable comfortably? The way women react to Archer? An updated black pride?  As a listener, I would say it’s all of the above mixed with a little American dream and class struggle thrown in for good measure and realness. Don’t sleep; it’s Coca.

Tristan "Tanjint Wiggy" Acker is a staff writer for JooseBoxx, youth hip-hop writing instructor with CHORDS Enrichment Youth Program (chordseyp.org) and member of the Inland Empire nerdcore hip-hop group the West Coast Avengers. Catch more of their work at westcoastavengers.com, follow Tristan on Twitter @Tanjint or e-mail him at tristanacker@gmail.com.