Review of Faimkills' "Good Times for a Change" Album 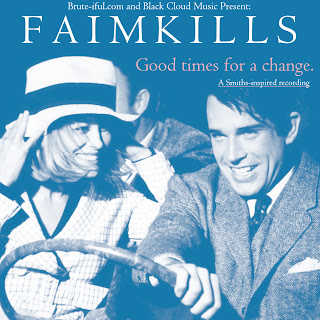 On his official Facebook Band Page, Faimkills describes himself as "the Violent New Warhol,
sarcastically, ironically, and in full knowledge, mixing and matching pop culture, and painting
it as seen fit. Product of the Bling-Era, raised on the Golden Era of Hip Hop, and manifesting
in a chaotic time, in which Hip Hop has never been more unsure of itself. In such an insincere
moment in this lineage, Faimkills aims to create with truth and understanding of the ambivalent
nature surrounding, as well to intimately embrace a transdiscipline of Hip Hop, punk aesthetics,
Literature, and the condition of human existence across gender, race, and subculture. Actively
listening, passively judgemental, yet fully aware of the hypocrisy that exists in himself, and in
everything around, is not afraid to question everything." Though I am impressed by such a well
written biography, let’s go ahead and see if the music can speaks for itself.

Interesting music playing… reminds me of Italy and soundtrack music then the beat drops and
we hear FaimKills for the first time.


"Every day feels like the last when you wake up alone. Don’t answer the door, ignore the
phone."
The song reminds me of what "Bella" might’ve been thinkin’ on that Twilight where Edward
disappeared and she locked herself in her room for a couple seasons! Faimkills compares this girl
to being the heroine in his syringe with her love being his drug. I like the feel of this song & I
think I’d enjoy seeing it live!

"Boy In A Stitch"
Lol at the "beer" skit before the song starts. The beat on this joint killin’ & Faimkills ain’t too
far behind! I’m impressed! I listen to a lot of rappers & the majority of them don’t know how to
ride a beat to save their lives so when I hear someone who knows how to keep time correctly,
it’s always a pleasure. Faimkills’ flow reminds me a lot of my "rapper buddies" from the hip-hop
forums I used to get on in 2006-2008. The forms usually consists of white boys with crazy lyrics
tryna get their flows right with constructive criticism from their peers. Faimkills sounds like
most of them sound after a lot of hard work! Good shxt!

"Death Of An American Disc Jockey"

Woooo!! If I was a DJ I’d run back his first lines… hot shxt! *runs it back anyway!*


"I’m on that subpop, grunge rap,yall hooked
Chillin’ in the halfway house with halfway crooks
Listenin’ to Nasty Nas, made you look
Panic in the streets of Cali! Got you shook"

The hook is a little too jumbled for my liking though! I can’t really understand what the
sample is saying. I didn’t enjoy the second verse as much as the first verse. I blame the lack of
emotion ::shrug:: Oh! Maybe it’s because it’s a totally different rapper by the name of VerBS.
Everytime I get critiqued by one of the big homies, they usually tell me I lack emotion and
excitement in my delivery. If the crowd isn’t hype then you lose their attention so I’m passing
that knowledge to you VerBS. FaimKills comes back at it when the third hits and finishes off
strong! I get the song now: A hate letter to the public radio. I understand though. The radio is
mad repetitive nowadays.

The beat is different but seems to fit FaimKills perfectly. I’m really enjoying his lyrics. He be on
some real shxt! He reminds me of the rebellious generation of "kids" today. You know! The ones
with the Mohawks and chains everywhere on their Hot Topic looking clothing! That persona
mixed with his lyricist skills paints a very accurate picture of Faimkills as an artist. Art Barz
killed it! Big ups!

I watched the video for this today right on JooseBoxx.com so if you wanna check it out make sure
to go through the archives.

"I’m an Aire to the air, Muthafuckin’ homophone".

I would kill to be able to read his lyrics while I listen cause the boy is goin’ in! This is definitely
another song I’d like to see performed live during like a fashion show or something along those
lines. Lt. Dan has an interesting voice. I enjoy him on the hook but not so much the verse. Good
work though.

Props to the producer. This that other shxt! Got me head noddin’ & those claps are crazy! I don’t
know if Faimkills added those on himself but I love em. This hook is crazy!


"& When the lights finally went out
I crept in, & you snuck out
But when the sun finally came up
You slept in, but I woke up"

Ooo nice second verse. I’m loving that part with the female singer in the background. Oh is that Sade?
Regardless…. Good shxt! Oh the singer is Faye Valintine…duh! So far this is my favorite track on the
project. Ugh! Who made this beat? FAIMKILLS GET AT ME! I wanna know! ::shrug:: FaimKills is obviously a Smiths fan! I ain’t mad atcha! I’ve been meaning to check them out for years now!

"I Won’t Give Up On You"
Umm honestly.. I zoned out until the second verse ::shrug:: my bad!


"I fell asleep at the wheel, a car crashed involved
While you lay there still, while I walked it off
Said you were broken inside,
I laughed. We nearly died!"

Oh wow! I don’t know if I’m trippin’ but I think FaimKills thinkin’ bout getting’ his freak
on with this girl who he just got in a car crash with before she dies. Maybe I’m wrong but
regardless. Sick shxt!! In a good and bad way lol. I love the song concept. Creative. Guess I’ll
have to listen to that first verse again one day.

"I’d Rather Not Go" ft Noa James
I’m feelin’ this beat. It’s different. I’m guessin’ this rapper on first verse is Noa James. Hmmm
he sounds angry but I like that. Now that’s a real sign of emotion. Then FaimKills comes in and
honestly, I feel excited to hear his voice. Weird! But I really enjoy his flow and lyricism. The
end of this is kind of creepy but a nice addition. Wish it would have been a skit in between this
track and the next.

"Trench Coat Mafia" ft Lt. Dan & Curtiss King
The beat reminds me of something Travis McCoy would hop on! Now that I think about it…
THAT’S WHO FAIMKILL REMINDS ME OF! I’ve been tryna think of who since I pressed
play. Of course there are differences but I hear similarities as well. Lt. Dan is screaming his ass
off on this hook! I like it! I used to listen to a lot of Slipknot and System of a Down so Screamo
shxt is all good with me! Curtiss King took the fuckin’ cake!!

Sheeeesshh! Love it! *googles him*

"Wildlife, Do You feel Like A Star" ft Waju
Nice little sample playin’ Let’s hear the producers flip! Okay. I like! This record sounds fun!
FaimKills shoutouts the I.E. That’s whassup! Waju is dope as well. The talent on this project is
really impressive. I’d like to see a video for this joint! Make it happen please?

"Stay In the Sunshine(Good Times For A Change)"
Alright last song on the mixtape. Beautiful. Go head & clear your mind FaimKills. I’m witchu!

In A Nutshell: I enjoyed this mixtape a lot. It’s a lot different from the rap music I’ve been listening to day in and day out. Though a lot of the same topics are covered: girls, drugs, sex, pain, FaimKills approaches these topics in a way where not only "listeners’ with the same lifestyle can relate, but are given a view into the mind of this very talented lyricist. I wouldn’t be surprised to see FaimKills doing major shxt in the future. I look forward to it. "Good Times for a Change" can be purchased HERE
Grade: B+