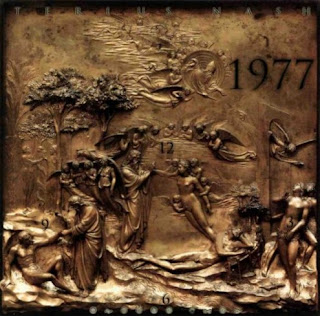 The Dream has been quiet. If I wasn’t such a fan I would have forgotten about him but HE’S BACK! I remember watching an interview where he said the last album he released which I believe was “The Love King” would be his LAST. Guess he’s not done yet and I’m glad to hear it! I have no clue what to expect. I’m hoping he sticks with his formula but hits me with some new shxt! Alright! Enough talking… Let’s listen to “1977”“Wake Me When It’s Over”Mmm. I’m loving it already. This is the type of music I like to make. It’s like R&B straight from the mind of producer and artists combined to make something original but familiar to R&B listeners. Sounds like he’s talkin’ to Christina Milian in this joint. I mean I expected to hear something about their drama but not so quick in the album! Might as well get it over with I guess! ::shrug:: He definitely stuck to the formula that worked for him. Great lyrics and vocal style!

“Used To Be”Aww shxt! I like this! I swear all The Dream’s music is perfect for practicing strippers! ::shrug:: I mean.. let me not say that! I just know you can usually play one of The Dream’s CD from front to beginning and watch your homegirls grind through the whole joint! But maybe that’s just me! ::shrug:: This song has nothing to do with anything sexual, though the beat gives that vibe. It actually sounds like he’s talking to a chick bout how she’s changed from the girl he used to love. Once again I think this song is about Christina Milian. Damn she really did a number on this nigga huh?!

“Long Gone”
I’m not really feelin’ this beat so far but let’s see if it grows on me as the track goes on. This song just isn’t catching my attention much. I got drew back in by the hook though which is good.. shxt! Bring me back! I like the concept now that I listen closer. I’ve been through something like this before & I can relate. Saying “I Love You” means nothing if you don’t have some feeling behind those words!

“Ghetto” ft Big SeanWooo! This is hot! *runs it back* Lovin’ the intro! I’ve been into chopped and screwed music a lot lately. That’s the shxt I like to light one too and zone out! I love The Dream… I always enjoy when he brings back his signature adlibs into his recent material! Great thinking! I don’t get the hook but it’s catchy aF!
“Ghetto, ghetto, & I got that ghetto”
Big Sean’s verse is next! Okay he goin’ in… It’s cool! Nothing that makes me wanna press rewind but bet he got that young check for it anyway! … but Aaaayyy!! The bridge on this joint is sexy! The lyrics are whatever and the beat is whatever but together that shxt go! ::shrug::

“Wedding Crasher”
Ay! I’m lovin’ this concept already! If you haven’t guessed already from the title, The Dream is intoxicated and talking to a “bride”,at her wedding, about all the other girls don’t compare to her and the relationship they used to have. After the first verse and hook I got tired of the song & just wished it would change up or something! What’s next? I really hate pressin’ next on The Dream’s songs because he always does random shxt out of nowhere! This is just too repetitive for me!
“I hate to have to crash your wedding but here it is!”
“Rolex” ft CashaThe song starts off with a Rick Ross type “UGH!” sound! Lol“This is Rolex Music”Hmm is it really? Cause so far it sounds like a waste of time! (pun intended) The music is annoying the hell out of me! I’m just not feeling the synths and the annoying ass hi-hat. Casha has a nice voice. I’ll go ahead and give her.. her props!

“Silly” Introducing CashaHmm why didn’t they put this song first? Maybe this will be all of her. This is a remake of ummm “Love Stop Making a Fool of Me” ….by uhh DENISE WILLIAMS! Great song! Or maybe it’s called “Silly”! HA! Lol but uhh I wasn’t really feeling the beginning production. You could tell it was a cover. Sounded too much like MIDIs and there wasn’t enough creativity into it. I mean it really does sound like the beat was made in garage band with stock drums! I mean props for being able to recreate it but if you’re gonna do it.. DO IT! ::shrug:: But enough about the production! More props to Casha! She did a great job! Wish she would have tackled it differently to bring some originality into it instead of it really sounded like a karaoke cover! Clean ass vocals tho….

“1977 (Miss You Still)”
This is interesting.
“If you can’t see the tears runnin’ down my eyesThen I guess I gotta make the song cry”

I wonder who passed away in his life. I’m thinking maybe it’s his mother. He has her name tatted all over him and says that no love can compare to the love she gave him. Would it be rude of me to say that this is putting me to sleep? I mean it’s touching but I am really missin’ his changeups. Oh I just heard him say
“Mama I miss you….everytime it rains
No matter how brigh the sun might shine! It’ll never drown out this pain”

“Wish You Were Mine”
I like this. It’s different. Nuff said. *sits back in chair*
“This Shit Real Nigga ft PharrellI love the title! Makes me know they can’t put this shxt on the radio unless they gon edit this shxt! 7 yup I was right! There’s a curse word or an “n” word said every other line! This sounds like it’s for the club though lowkey. It’s alright! I liked his rap more than his singin’ on this! Woo! Love that the beat did something different…I was about to change! Aww it was like for 2 seconds.. ::sigh:: I’mma keep listening cause I wanna hear what Pharrell bouta do on this shxt! Woooo! Yeaa Skateboard P came on and killed it “my nigga” ;) lol love it1 Wish he woulda changed up the second half of his verse tho. The my nigga thing was cool for the first half but it gets played out once he used it after them first 8 lines! ::shrug:: Cool lil track!

In A NutShell:
Umm it was good but I understand why this was released as a free project! I mean it’s good and there is quality music on here but no HITS! I mean there is like 1 and a half songs I might play back or put on a mix but besides that I think this was just a good way for him to get some things off his mind through music so I respect him for it. Would I recommend this to a The Dream fan? Yes! Because his supporters usually love anything he does but if someone who wanted to hear The Dream for the first time asked if they should listen to 1977 first? I’d quickly say no and link them to a copy of Love vs. Money. I’mma need for somebody to go over there and freak some happiness into The Dream’s life! Grade: C+