Review of Carl Fontaine's "Sangria on Ice (The Prequel)" Mixtape 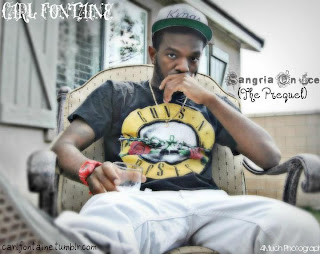 I first ran across Mr. Carl Fontaine, known as Big 330 during that time, back in like.. what… 08, 09 during the time when “jerkin’” was the thing to do. Not sayin’ that it isn’t anymore but you get what I mean. At the time my boy fResH had put me onto the “craze” and me being the music head I am, I was researching new jerk artists and checking everyone out. Big 330’s name popped up during the search and the name stuck with me. Ironically, Big 330 reached out to me maybe half a year to a year after that and showed much love and respect my way. It’s been maybe a year or so since then and there is no more Big 330. You must now address him as Carl Fontaine and, though I’m sure you can still catch him jerkin’ at the function, his music has evolved into a totally different genre; Hip-hop. Let’s see what this Akron, Ohio transplant has to say to all the people listening in the Inland Empire.


“Aquafina”
Alright…. I’m vibin’…. The beat has that reggae vibe with a hip-hop feel but the sounds sound a bit cheap. Like Fruity Loop soundfonts but ay! Use what you got & I’m not even mad at it.. Now let’s talk about Mr. Fontaine. Hmm I wish there was someone I could think of to compare his sound to but.. no one comes to mind. It kind of reminds me of Mac Miller but there are obvious differences. He really just reminds me of a lot of the dudes I meet at some of these house parties I’ve been to. Not the super ghetto ones with 4 fights before the nights over…. I mean the ones with the white girls playing beer pong and the bathtub full of liquor. Fontaine didn’t come with too many punchlines. His verses were more so on a storytelling tip but not really. He just…. Rapping ::shrug:: I ain’t even mad at cha! Another day in the life of Carl Fontaine. I gotchu...

Okay. Cool little statement there. I aint even mad atchu. I know plenty of people who don’t smoke and this is my first time hearing the reason being that someone doesn’t smoke because they do not want too conform to society. I can respect that. Fontaine’s flow is “cool” throughout the verse, though off beat at times. The track and production reminds me of when you get in the studio and you got a couple rappers in there and you hear a beat and just let it play for like an hour and let niggas write to it and take turns spittin’ what they came up with. It kinda has that “studio cypher” vibe. Alright for the feature we got Lenier Davis. I just met him through facebook a couple days ago and we’ll be working on some music hopefully soon. His flow reminds me of the mixtapes from local group H-World I used to listen to. Would it be weird to say that he has that Moreno Valley sound? It’s not even Moval! It’s like that “record in the garage” sound that I’m way too familiar with. Dude has a lot of potential. He goin’ in on this verse. If he can work on his timing on a couple things then he could kill on some Westcoast mixtape shit.

“I’m conceited, damn girl I look good
You look better in my presence, get that understood
I’m cocky, my swag is the reason
Don’t be offended. I’m just conceited”

Oh okay that really is a cocky ass hook. I hate cocky niggas lol The beat is cool. Nothing spectacular. Sounds like a new producer working on creating his own personal sound. I’m feeling this verse! Blame the lyrics! He back on that “storytelling but not really” tip. He just rapping bout what’s on his mind even when it comes to things like seeing a girl’s Gucci print panties and only being able to see “Touch me” on them. Man with some work on placement of his words and flow some of his lines could be way better felt. Fontaine got Rich I.E on the 2nd verse. What’s good Rich! Ha! I like his lyrical play on the alphabet! It’s been done many times before but it’s always nice to hear a different take on it.

“My A girl tryna mess with B
Is it really going down I’m tryna C
Chicks on my D cause my name i.E
Chicks wanna F cause I put it down like a G”

Ayy! Lol I see you. I like that. This is one of my favorite verses I’ve heard from Rich so far. I heard a little timing issue in there. I think if you guys go back to fix those mistakes it’ll make your verse 10 times better. Don’t settle. Up next we got DREWB1LL. I’ve never heard of this artist so this will be a first listen for me. I like him. He has that local sound too. To me local talent is the present and most importantly, the future.

“My Beat Loud”
Okay this beat isn’t hip-hop. Matter fact… nothing I’ve heard so far on this mixtape has really been “hip-hop”. I mean all rap music is apart of hip-hop in its own form but I ‘m talking about boom bap, rhythm and blues, sip coffee on the beach, & fight the power on the weekends type hip-hop. This beat is on some Lex Luger shxt or as I like to call it “the new sound”. They even use ol boy’s sound tag on this shxt! Smh. Alright let me not judge you on that because the beat does knock. ::shrug:: Naw I can’t vibe. I’ve heard too many songs that sound like this today! My bad Fontaine. What else you got?

Ayyy! Lol I like this. It reminds me of some early Soulja Boy type shxt. (Been a fan since 06 and counting). The flow ain’t on no Soulja shxt tho. It’s clearly Carl Fontaine on this shxt and I appreciate that he kept his style on this instead of doing what everyone else is doing. This is pretty good for a freestyle. Lol I’m mad he just said that he messed up but shxt I applaud you for trying again but wait.. “Thank you for listening to Wine & Dine”… is that what’s up next?... you giving away surprises and shxt nigga!

“The Life”
Oooh I’m loving the beat. That organ is ridiculous. This shxt dope as hell. Damn I’m feeling this. I mean..it’s not like oh my gosh this shxt is amazing but I’m vibing…. I hear potential. Keep spttin’ what’s on your mind my nigga. It’s coming along. Lol I like the end. I’m a fan of Auto-tune and always will be.

In A Nutshell:
This was a cool little mixtape. Not too short but not too long. I enjoyed it. I think like every artist, Carl Fontaine has some room to grow but knowledge is power and with the hard work I’ve seen him putting in he’s gonna learn enough to run some shxt! I’m excited to work with him in the up and coming months and I’ll be on the lookout for his next release. You can download "Sangria on Ice (The Prequel)" HERE