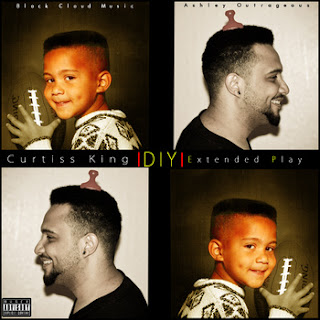 21Sev7n
Love the sample choice… Curtiss King on the beat? Okaay I see you.


I named myself King and I don’t take that lightly
Martin had a dream and it looked just like me
Curtiss has a cool little flow. I like his lyrics more than his flow but it may just be because of how he chose to approach this beat so lemmie check out the next track to see what’s good.

Sinbad
Lol Yellow nigga! I love this song and the video was hella dope! If yall haven’t seen it yet we have it exclusively on Jooseboxx.com. Keep ya eyes open. I think this beat allows Curtiss to showcase his flow a little bit more. The track reminds me of something you’d hear from the OFWGKA camp. Great track!

That’s How My Days Goin (prod by Jynxx)
First of all I wanna say that I like the fact that the producer’s name is in the title. Now I can look him up and give him his props personally. Nice! First verse was cool but the second verse stands out!


I wake up early in the morning cause the Lord made it possible
Made a few calls for that money then I’m Vamanos
Head to my car but my car said adios
I guess the towtruck man yellin “Got em Coach!”
I have days like this too. I don’t be getting random twitpix tho.. I wish! Lol Ay! I’m a big fan of chopped and screwed music.. Nice idea to switch it up at the end…this some UGK type shxt! Nice track.

Zipperlips
Another beat by Curtiss! DOPE!! Oh gosh! …Major props. I didn’t like the “I can show you” singin’ but I love the “Zip ya lips Bxtch” part. Lol ::shrug::… Imma start saying that shxt! Lol Curtiss definitely has a unique style. I like. 

PCC
Ha! Great sample choice Curtiss. I am so impressed by your production! Pumas, Cubs, & Cougars? Oh my Lol


I can your Winston, u can be my Demi Moore
You can be my science teacher, we can study intercourse
Track is pretty cool.. I love the end tho. Name droppin’ and shxt lol.

SuperNova ft Faye Valintine & Noa James Prod by Skhy
Okay. Waitin’ for the beat to drop. Hmm it’s cool. Curtiss is killin’ tho. He is definitely a writer. You can hear it in his flows.


I’m an improper fraction intoxicated with action
Nauseated by normal muthafuckas with no passion
The singer on the hook is aight! ::shrug:: Nice vocals but no soul in it. I’m guessin’ that this is Mr. Noa James on second. I wish his verse was a little louder so I could focus on his lyrics a little better. I love the aggression in his voice tho! Raw shxt. This track is cool but if I replayed the mixtape another day it would probably be one of the “skippables”. What’s next?

Feels Good
Oh man! The beat got me zoning... great! I always enjoy when the producer raps on his/her own beat because they know best the vibe that was meant to go with it! Even the singing on here is smooth.


I don’t think about them women that try and chop up this perfect harmony
They push control C but can’t copy
They push Control V, but can’t keep with yo paste(pace) and they wanna see us erased
I feels that! Girls need to know that they come second to music before they get into relationships with rappers. ::shrug:: Just sayin’!

What I Need ft Sean Falyon & Dirty Bird (prod by Jyn)
Oh my! This shxt sounding classic… Props to the producer Jyn! Curtiss got me vibin’ with him. Sometimes I feel like he’s speaking to me. Kinda love the feeling cause I be feeling him on the shxt he says. Falyon is one of the featured artists for the track and I like his voice. It sticks out to me. The flow is nice on this beat too. Dirty Bird is killin tho!! Sheesh!


I want lesbians to meet at least a couple days a wee
k just to confess how hard they skeet whenever I speak over a beat.
Uhhhhhhhhhhhhh!!! (Pause?) lol Dude got lines tho! I have to admit. Lol. Nice track.

Point Your Fingers ft FaimKills (Prod by Tae Beast)
This some real shxt. Niggas will be quick to give you props behind the scene but be too afraid to show you love when you need it. Shout out to Faimkills on the feature.

Curtiss King. The End. Haha! Naw but for real. I enjoyed this E.P. He is truly gifted rapper with compelling lyrics and a delivery to match. His words give the listener a view into King’s intelligent mind. Anyone can rap about drugs, cars, bitches, and money but it takes skill and knowledge to do something different and I give major props to Curtiss King for pulling it off. He is a perfect example of how to “Do It Yourself”. Get the D.I.Y. EP by Curtiss King HERE