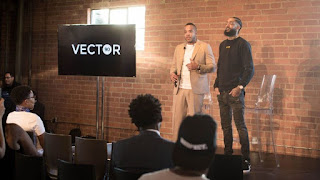 California and the world lost a luminary artist and philanthropic entepreneur on the last day of March 2019. I have to admit a case of whiplash when seeing all the praise for Nipsey Hussle's activism on the internet given that the kinds of community work he did is the kind of community work white
politicians get bashed as neoliberal sellouts for.
When Nipsey Hussle put ideas into action to help his community, it wasn't a war to disband police or a revolt against a system of market capitalism but almost the exact opposite: STEM center/co-working spaces designed for corporate partnership, retail stores, working with local police. Even though there are major exploitative elements and flaws to capitalism, Hussle recognized that people in his community need to be able to benefit and succeed in this world of corporations and currency. I'm not saying this is a "checkmate!" to critics of police and capitalism but rather to introduce something to think about: perhaps someone like Hussle who had experienced hardships of difficult urban struggle understood that there is a reason people partner with the powerful and learn to deal with the world that is as opposed to waging an ideological battle about how the world should be.
I fully agree with those that have major structural criticisms of the police state and late capitalism, but I also think there's something to the idea that there are roles for different people to play and that sometimes people have legitimate reasons to work with unsavory characters within imperfect systems to achieve good and advance goals. I've noticed most people at least implicitly agree given the preponderance of comments memorializing the rapper saying it wasn't just about his music but all the good work for his community. I can't help but notice that these within-the-norm community outreach efforts are the kind of thing the very same people online memorializing him would bash a politician for because they support the structure of police and capitalism. Perhaps all the people praising Nipsey's firmly-within-the-market-capitalism-norm-for-activism community work would consider this the next time someone who did similar charitable activities that is not a beloved hip-hop artist dies. Perhaps such folks could consider this idea even in assessing the actions of living community actors.
I would also note that I find it profoundly unlikely that government agents killed Mr. Hussle given that STEM hubs, co-working spaces for corporate partnerships, retail stores and advocacy for working with local police are among municipal government's favorite activities and initiatives to support among their citizens. Nipsey wasn't advocating the dismantling of capitalism or markets or police, he used markets and other imperfect existing structures to lift his community - it seems to me he was about helping people have opportunity in the imperfect world that exists instead of fighting a battle about how the world isn't what it should be. Laudable pursuits all, but not the kind of thing the government kills you for if you're using logic and really thinking about it. Don't besmirch his memory with desperate grasping-for-straws ridiculousness.