The long-awaited Chamber Records supergroup album has finally come- in the form of a G-funk nerdcore magnum opus that finds the Chamber Crew in peak form despite not having released an album together in most of a decade. Namek's verses are so air tight and in the pocket that it's easy to take his consistency for granted- don't, there's gems in all of his rhymes. Josiah remains an expert MC but his easy transitions into funky choruses and vocal melodies throughout the album shows a maturity and songwriting sophistication befitting the resume of these accomplished musicians. 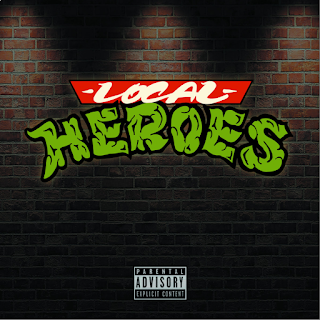 I've heard most Chamber albums and this might be my favorite showing from Malathion whose creative wordplay and vocab refuse to be ignored. Hearing how hard Arkyve tears shit up here, it's just mindboggling to think that his dude hasn't missed a beat in two decades. The album showcases its diverse production while also putting forth a coherent snapshot of the larger than life Chamber Boys and the living myths they have become. The real magic of the project is that the legends are true...the dudes still have the goods and they execute. The record was worth the wait- and that's rare.

With funky production from Spok, Rokem, West Coast Avengers' RasJosh and more, the Chamber crew attacks verses with topical discipline but always with the flair of the extra hip-hop mile- their music is made with love and we're all lucky for how much we can hear the fun they're having bursting through the speakers on this rollickingly funky but still smooth album full of lyrics and west coast tunes for a new stony, nerdy generation that also needs to know about the 626's longtime champions.
Full disclosure, Chamber Records is a bunch of my crew's oldest friends and allies and this album felt like the logical emotional and artistic culmination of everything we've seen them do over the last 2 decades- but that don't mean they're done. I suspect they'll be back to save us from monotony and whack beats whenever our cities call for them. 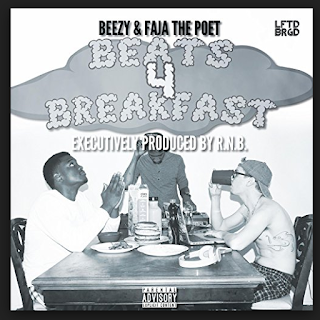 Breakfast begins with chill pensive statements of purpose from Faja and Beezy respectively. Faja describes his aspirations for his family in the I.E. and for artistic validation. Beezy is the id to these wholesome desires as he shits on whack bitches and expresses burning disdain for those who would dare sleep on the new wave. Beezy is thoughtful and disrespectful at the same time, Faja’s chill deep voice expresses earnestness- both seek artistic excellence, hence the musical Wheaties.

“Exit off Del Rosa…Might get snatched out your corolla…” Beezy shoots warnings about San Bernardino on the album’s second track “California Soul”, followed by Faja calling out sectors of the I.E. city by city. “Crop Tops” is a chill but banging west coast cut featuring RNB that has Beezy telling outlandishly surreal hood tales of braggadocio reminiscent of Eazy-E and Adrock of the Beasties. The “Old school music” theme punctuated by the recurring image of “crop tops” helps these artists build in simple but effective ways while still drawing on west coast rap’s rich legacy.

A message I get from the persona that Beezy presents is that this is a dude whose raunchy lyrics and shocking wordplay are a defense mechanism for a soul like a satellite that actually receives signals from everything. Faja’s MC persona is much more good-natured and the contrast of the facetiousness with the straightforwardness with a common I.E. demeanor is an alchemical pairing that reminds me (biasedly of course) of Stone X Sober or myself w/ Sham of WCA, Skruf and Fresh Raheem of Poetik Prophets and many other multi-racial MC duo pairings the So Cal region has seen in the last decade.
On “Hold the Applause”, Beezy explains how MCing helps him shine besides being a white boy who can’t dance per his own admission. Kasai and Tru Speech deliver on all these features. Every one who touched this project is overly dedicated to craft and it shows. I keep hearing Faja talk about helping his parents and I don’t hear this enough in music, particularly from this area. It’s refreshing to hear MCs who understand priorities. “Hold the Applause” and “Breakfast” both have an air of potency and melancholy- this is these artist’s shot but I hope they are not discouraged if it does not hit every target- sometimes the win we seek takes firing off a few rounds. That’s not to say this album isn’t wonderful- it’s damn near perfect with a coherent thematic and musical feel- but sometimes densely crafted hip-hop doesn’t get the immediate success and attention it deserves. Having dropped the first music video for the project, let’s hope that changes from this point. Faja and Beezy are like angels and devils on your shoulder, like Jay and Silent Bob- the solemn poet and the rude rapidfire spitter, their combination is electric- grab a plate.