A Rainy Saturday in January with Viva Mescal, Zzay and the man once known as Johnny Greaseball

Having lived in for the decade during which I transitioned from adolescent to young adult before having lived in  for the last decade does an interesting thing to how you understand the East Los Angeles / Inland Empire milieu...you can actually get to in less than an hour from when you take the 10. A lot of people in the western parts of think of anything east of East Los as rather “Inland” covering vast areas like , , and others that exist in a sort of interesting limbo to those in the So Cal know. On a rainy Saturday morning in January I dipped out to Viva Mescal’s EOTR studios. When I arrived he was dragging just a bit, having had a birthday/record release celebration the night prior.

Mescal has been my crew and I’s vision of the future of Latin L.A. hip-hop since he whupped our collective asses in a massive performance contest in in 2015 and started booking us for various shows in the year subsequent. He and his crew EOTR have kept boom-bap fresh while showcasing diverse progressive professional music in major venues with top-acts like Murs and Felipe Esparza from East Los to .  One rolls up to the automated gate at their studio in and it feels like the Rebels on Yavin IV waving in allied freighters. After getting lost like a dweeb in their nondescript hallways Penner and other EOTR homies kindly point me in the direction of Mescal’s studio even though I’ve been here like 4 times before at least. An honest and communicative collaborator, Mescal engineers a recording of a song I’m working on produced by Yohalmo for my first solo album. Both of us familiar with these motions, we have a satisfactory set of layers within 45 minutes and have time to get some pho and visit the dispensary Zzay works at.
"keep it to yourself / if it's negative..."

The large pho combo is fire and Mescal dishes on how busy he is trying to achieve and represent for his city and families. He’s engineering, recording new music, making a video for every song on his new album to name just a few things on his plate. He says he’s shooting the next morning with a guy who was working an a Hopsin video while we were in the stu. His latest video, “Peyote Cactus” having garnered most of 10,000 views in the first month of it's release is a good indicator that he’s not just saying shit. “People don’t have attention spans anymore and that’s okay. You don’t gotta hype up some shit for 6 weeks before you drop it. – ‘got a project coming out’ – okay? Cool? Just give it to people. Just give it to them. No need to sit on it forever.” 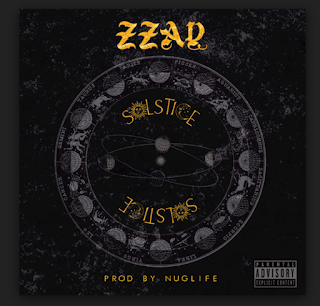 Zzay brought some sunshine into a rainy day and rolled us all a blunt while we visited her shop and caught up about video shoots and newly discovered mutual friends. She’s making visuals for her stellar new 4-song cycle producedby NugLife Solstice. As someone who’s followed Zzay from the outset of her recording endeavors I’ll always have a soft spot for the spirited growing young woman who rapped and sang her real thoughts over hip-hop soul as she found herself but the Solstice EP finds her a woman so confident in her groove that it’s a Throne now; NugLife is a wildly melodic producer but knows how to make productions that keep the performer front and center. With more upbeat ideas and spiritually conscious lyrics from EOTR's resident songstress than ever before, the EP goes down easier and more smoothly than any of her other projects, a smart snack of posi-neo-soul made with utmost craftsmanship; both artists are in their pocket. 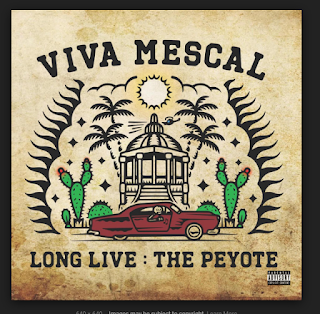 Blunted back at the lab, Viva Mescal slid me a copy of his new album. Now his Weird Turn Pro LP from 2017 is a master’s class in keeping an album one coherent mood but this new album Long Live the Peyote is my favorite record from Mescal since the fevered and political Strange Rumblings in Aztlan. With swifter ease than ever Mescal bridges hip-hop posturing with grown man example setting, barring out spazzing with hook-driven songwriting, psychedelic politics with working class grounding. With beats from Rokem, Global Getdown and more, the album bangs and unfolds cinematically- Mescal’s ponderings and pontifications about drugs like lean and peyote weave organically into references to the Latin culture’s agua frescas and nopales that he grew up with. Before we parted I think we had a moment of kindred business- seeing someone in front of us who kept as busy as we did. I see it seldom and sometimes it’s nice just to be reminded that you’re not the only insane one who is trying to balance so much. He gave me valuable advice on the album he was helping me with as well as another project I have coming in the Spring and we promised to follow-up with each other about both as well as music we had mentioned to each other for listening recommendations- I’m still curious as to what he’ll think of At the Drive In, Mars Volta and No Malice albums I sent him links to.
Greaseball from Strange People, Herbalistics, and lately Cookie World Productions has long been my favorite Inland Emcee and I don’t say that lightly. I recognize that Vision is the illest freestyler in the region, I recognize that Cam Archer’s power levels are unimpeachable, I recognize the versatility of the Wizard and the battle chops of Epyk Saga so I’m not claiming my preference is objectivity I’m just being honest about my tastes. On the way home from Boyle Heights I decided to stop in San Dimas and catch up with the man once known on the other side of the I.E. as Johnny Greaseball. 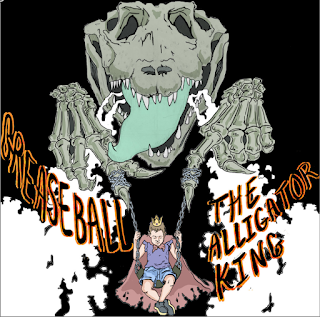 
Between the aforementioned Zzay and Greasy B, I don’t know whose journey of change surprises me more…as I type this out I think it’s Greaseball’s because Zzay’s felt gradual and step by step whereas Greaseball’s life shifts seem even more volatile. I remember hanging out with him in dusty garages and backhouses in and throughout 2014, 2015 and 2016. Reckless swings through downtown with his drunk troublesome exes, anxious blunts with ne’er do wells in alleys….visiting him at what many call the TrapHouse in was different. A beautiful home sheltering a makeshift artist commune, various beanie-topped sweater-clad tall men made a veritable vegan feast in the kitchen while Greaseball and I smoked glass pipe bowls of herb in front of his computer and Xbox, showing eachother demos. Young women with their facially modified friends brought in cannabis cannisters and twelve-packs of Stella . One such person said she used to hang out with my sister in my old home to my stoned surprise. Grease talked about embracing progressive philosophies that he used to seem somewhat distant from when he was just a thunder-voiced street urchin battle-ready scrappy Riverside MC. On songs like “The Pain” from his new album The Alligator King  Grease shows that his values have changed- he now walks through life with a deep almost burdensome empathy for everyone’s struggles; every stanza is not a tank filled with internal rhymes designed to melt your face but rather with melancholy limerick that often devolves into tourettes like spasms of coping mechanisms for the agony of letting things stack. Even when he does spaz on this song, it’s to show a man fraying as he grasps at his values like a sweater being ripped from him and not an MC battle like display of spittery.  He grapples with the loss of his father at a young age in new ways yet compared to the hagiographic tracks about his father in his past oeuvre. Now he complicates the picture of his fallen patriarch as he discusses the struggles his mother bore for the family growing up. On “ ” he says goodbye for now to his hometown of , singing wistfully and hopefully about his current Pomona-Claremont village frequenting dwelling paradigm. Given the inter-genre collaborations and production company community he’s developed with Birote the Musical and other Cookie World artists, who can blame him? Rock artists and the always welcome Hepthy sound equally natural on this indie hip-hop masterpiece of an album.On "I think I do", Grease embraces the idea of free will and gets positively philosophical. Grease was fresh off of a night at the Smell in LA rocking a packed house when we caught up; also right around his birthday, like Mescal. I told him I was truly envious of his new life-art-friends arrangement. That I had long sought such a treehouse refuge in my own 20s and that I was happy he had the chance to truly enjoy and expand on such an opportunity. He gave me some kind feedback on a song I had about just those very topics. I asked him if he'd heard Mescal's new one and he said not yet. He told me a story about how he saw that his last album Happiness to Me was on a Snapchat story shared by EOTR some months back and he laughed and thought "gotcha!" as he saw the image scroll by on his feed. "Good," I thought, "Greaseball and EOTR should be hearing eachother as they are each the most cutting edge progressive boom-bap Latinos of their respective regions..."
His new album haunts me- for me it represents working class Latinos of my generation finally bumping against the realities of the limitations of our aspirations. Here he is existing in a situation I used to fantasize about and he drops a 45 minute long document as to the inescapable pain of life when you’ve been trained to feel inadequate by a too-often too-narrow-minded society. Here he is to say the pros and cons are just as balanced in his circumstance and perhaps even more starkly and intense. His Gator-King persona alternates between being out of fucks to give and being paralyzed with sympathy for his fellow misfits and lovers. His defensiveness slowly gives way to his seeing all of our souls behind surprisingly earnest eyes.


Mescal and Greaseball are both sensitive thoughtful Capricorn poets who have built communities they’ve nestled themselves within. I relate more to Greaseball’s claustrophobic paintings because of where I am from but visions like Mescal’s give us I.E. kids an idea of what we’re looking for when we stare towards the coast and press down on the gas. I thought of both of them and the friends I’ve been lucky enough to meet and know through and around them as I made my way home, transferring from the 605 North to the 210 East, chasing the massive distant moon.
Tristan "Tanjint Wiggy" Acker is staff writer for JooseBoxx, a youth hip-hop and poetry tutor, and member of the Inland Empire nerdcore hip-hop group the West Coast Avengers. Catch more of their work at westcoastavengers.com, follow Tristan on Twitter @Tanjint or e-mail him at tristanacker@gmail.com
at 8:49 AM Labels: cookie world productions, east of the river, eotr, greaseball, Hephty, Herbalistics, Johnny Greaseball, mescal, mescalito, strange people, Tristan "Tanjint the Wiggy Woo" Acker, viva mescal, yohalmo, Zzay