A couple Wednesdays a month I'm gonna try to show you guys something off the beaten path that I'm bumpin'.... 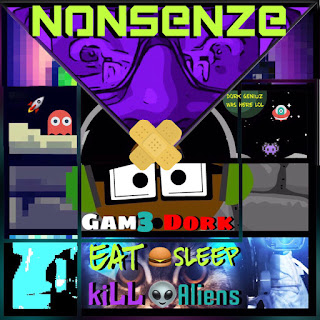 "Battlestar galactica or Battlestars in Africa?"

I'm glad to have come across this insanely dorky but barsy and flavorful Torrance, CA based MC/producer Nonsenze. His latest project Gam3 Dork: Eat Sleep Kill Aliens is unabashed nerdcore revelry. This record feels like a dense mixtape with layers of melody, rapping, noise samples and electronic madness. Each fantastical scenario his strong concept-having songs paint finds our protagonist panicking and reacting hysterically, hilariously and descriptively throughout the narrative.

Nonsenze refers to everything from online sci-fi shooter games, obscure comedy, the Simpsons, comic books, and more all while deprecating his own distance from the mainstream normalcy he feels the world is always encouraging him to.

"If you do drugs then don't do too much"

Every song begins with an earworm of a sound or melody loop that drops into Nonsenze the Dork Genius earnestly explaining a piece's nerdy concept. By the middle of the track he's picked up the pace and doubled the agility in his delivery and internal rhymes. He stays on the balance between smart and fun in a ridiculous and straightforward way.

"Nerdcore's been in this since the beginnin'"

Nonsenze proclaims on The Rain Part 3...and when one re-examines how steeped in kung-fu movies, comic books and Star Wars even the earliest rappers were, it's a wild claim that makes more and more sense...kind of like the man himself

"When it comes to this nerd shit I am a God"

On tracks like "Planet Space Man" and "Zombies ate my neighbors" and beyond Nonsenze repeatedly displays his mastery familiary and openness to every kind of nerd. There's something here for every kind of weirdo obsessive.