I Want This For My People: Tanjint Wiggy's raves, nitpicks and thoughts on Black Panther 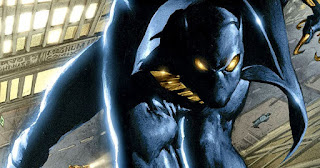 Black Panther art by Mark Texeira
Black Panther is that rare movie that ScreenJunkies probably can’t make a good faith “Honest Trailer” about. They could poke fun at the politics and over-the-top-ness of its allegory but as far as a critique that really pierces something this movie did wrong or poorly? I certainly can’t think of one. I count this as Marvel Films’ 8th classic film in 10 years. The story was original despite having shades of Shakespeare and Lion King, the color palette of purples and blacks was a delight, the effects, acting, editing and directing was all pretty flawless. There are no boring parts and it’s probably the least corny movie Marvel has yet to make. There are seriously probably less than 5 genuine dialogue cringe moments which is amazing for superhero fare.

My critiques for Black Panther have more to do with the Marvel Cinematic Universe’s slavish addiction to McGuffins. It bothers me that every power is the ultimate power, every substance is the ultimate substance. This makes none of the powers and magical gem McGuffins feel very special at all. Before it was the Arc Reactor or the Mind Stone and now it’s vibranium.  Vibranium has always been a very valuable resource in the Marvel universe but it wasn’t a healing elixir and wound cast and all the other thousands of things they did with it in this movie. I’m also tired of hearing “we’re the best spies” from characters in movies by the same people gave us 18 Sam Jackson after-credits clips  bragging about all his backup plans for the backup plans when his ass got ultimatey got taken by surprise by Robert Redford and has done pretty little to be helpful to the Avengers since Age of Ultron. No one was supposed to know about S.H.I.E.L.D but clearly people did. Now we’re being told no one knows about Wakanda but clearly Klaw, Howard Stark and others knew something at some point.

So Black Panther is pretty perfect but the way the MCU is handling tech is driving me a little nuts. We’ve been seeing these super-scientists create and develop technology that would save and revolutionize the world a hundred times over about 5 times now over 10 years…it’s time to stop acting like most of the world wouldn’t start to look like Wakanda at this point. Or are the hero-scientists all Teslas being stopped by the government from sharing this world-changing tech?
I heard talk that Killmonger is the best Marvel villain yet. He is as good as Vulture who is second only to Kingpin in my opinion. Kingpin is the greatest MCU villain so far because he is an original character with compelling pathos and truly dangerous and surprising. Most of the other villains are predictable versions of the hero. Killmonger isn’t as predictable as some but he’s certainly Dark Panther. He’s also wildly well done which is why ultimately I still rank him quite high.

It makes me chuckle that people who consider themselves Afrocentric or sympathetic to Malcolm X brag about thinking “Killmonger was right”. He is bait. It’s a trap. Killmonger was the most American character in the film, he is the dark side of what CIA agent Everett Ross does made explicit. Killmonger’s ideas about conquest and victory and revenge, opportunity, living nice and fixing the world- American as apple pie. His whole frame is poisoned by the western imperialism he decries. People who think they are showing their rejection of American strong-arming in pledging allegiance to Magneto, I mean Killmonger, are actually showing just the opposite.

Then there's that iconic scene at the end where an Oakland youth asks T'Challa who he is. This was a pretty perfect ending and its execution made true and clear what so many said this movie promised: superhero role models for a black youth long hungry for them. We knew that scene was coming but it was still breathtaking and emotional. I think every  young(ish) nerd of color in the audience around the world thought at that moment, "I want this for my people". I certainly did.