Of Grammies and ghosts of G.O.A.T.S. 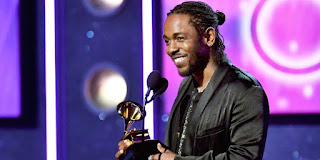 People weigh artistic merit, commercial impact, and cultural impact so differently to the point where rankings of greatness are useless without at least attempting to specify what’s being weighted. For me, Kendrick Lamar is the greatest rap artist out of people that are household names in the last decade but that’s a limited category. He’s not the most interesting rap artist of the decade to me, his music doesn’t speak to me the most of his peer group of rappers, his albums (though classics to be sure) aren’t the greatest art or most-replayed of rap albums of the last decade for me but his work is technically masterful, cinematic as all hell and intensely culturally resonant. For me, and this is just me, those qualities are probably why I don’t re-listen to a lot of his material. Kendrick’s shit is like Breaking Bad- smart and gripping to the point where I had to see it once to know what happened but the vibe is so narrative driven and often darkly intense that I pretty rarely just want to exist to it on a repeat basis. That Kendrick’s $10 million dollar production team rarely lets one song be one song and cuts 3 different songs into a given track with the switch-ups accompanying narrative twists, even when there is a Kendrick song I want to replay, it’s not really easy to just go replay the song I liked. It’s not a question of “do I want to hear that song again?” but of “do I want to experience this audiobook short story again rynow?”


Artists like Kendrick in the post-Lady Gaga mold, which is most post-2010 artists on the pop-charts, aren’t making music so much as they are making short-films they are soundtracking. Kendrick’s movie albums are great art that are must-peep cultural documents but they’re not like a collection of vibey songs I want to have playing as I blaze or drive.

I hear Drake mentioned in discussions about Kendrick since the Grammy’s aired in the last 36 hours. About that I’ll say there’s nothing to dislike about Drake just as much as there’s nothing to dislike about vanilla ice cream. It’s not gonna break any rules of good taste but it’s not gonna break any ground either. If Drake is on the “commercial impact is weighed far more heavily than artistic merit” part of the spectrum, I’d put Open Mike Eagle on the “artistic merit is weighed far more heavily than commercial impact” part of it as far as talking about how we measure the greatest rap artist of 2008-2018  but what decade we’re talking about matters. People saying Kendrick is the greatest rap artist of the decade may mean the decade that began when his major label debut came out in 2012, or the decade that begins now. All that matters.

I am not so close-minded or snobby as to be un-open to the possibility that the greatest rap artist of a given decade couldn’t both be the artist with the most artistic merit and commercial and cultural impact. I just think it’s rare. In terms of hip-hop, OutKast comes to mind and even then, while the Stankonia praise was well-deserved, the post-Stankonia work really got the praise that Aquemini should have gotten. While Kendrick has that kind of potential, I don’t think he’s there yet. His work, while a much smarter modernized take on the world Dr. Dre and N.W.A introduced us to, is still too pedestrian and familiar in that way. OutKast made their version of Atlanta a place out of time and space; they made us believe in Stankonia. I’m not there yet with Kendrick but I hope to be at some point.

As far as Grammy's, the fact that as a rapper you have to be as big as a Kendrick to even have the chance to have the privilege to lose in the biggest categories, the fact that artistic statements from creators as huge as Open Mike Eagle aren't even popular enough to warrant consideration in the spectacle, that the institution is still one so conservative a Spanish language song with billions of listens globally couldn't win a single award, are all indications that the opinion of this event and those who throw it isn't even one worth considering seriously. We might all be better served with a big great concert and a huge "Good Job Everyone!" sign.
Tristan "Tanjint Wiggy" Acker is staff writer for JooseBoxx, a youth hip-hop and poetry tutor, and member of the Inland Empire nerdcore hip-hop group the West Coast Avengers. Catch more of their work at westcoastavengers.com, follow Tristan on Twitter @Tanjint or e-mail him at tristanacker@gmail.com
at 4:56 PM Labels: breaking bad, despacito, dr.dre, Drake, G.O.A.T., GOAT;, grammies, Kendrick Lamar, n.w.a, open mike eagle, outkast, stankonia, Tristan "Tanjint the Wiggy Woo" Acker