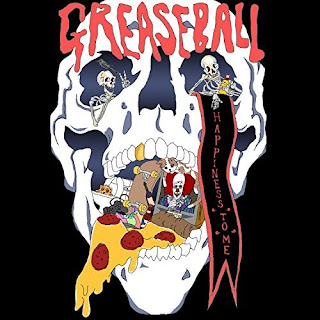 Greaseball - Happiness to Me

Given that MC Lyfe, Johnny Greaseball’s counterpart in Riverside’s Herbalistics duo, dropped his album at the beginning of 2017 I found it very appropriate that Greaseball dropped his album on the very last day of 2017. Greaseball has been teasing the world for years with lots of great Herbalistics songs, Burgundy’s songs, Strange People songs, and even his own “Bad Cat EP” some years back. Throughout the years of the wunderkind’s mic mastery, fans like me have waited for an LP to quench the need for his work. One of the most zeitgeisty rappers out there, his work reminds of the Grouch, of De La Soul, of Retch and Da$h and other grimy corner kids with humble yet booming stories of the towns they’re from.

"You were born good so you let the world win"

The skits remind me and WCA's Sham of MC Chris and the Chronic albums. Grease's philosophical perspective on hedonism and existentialism is funny and well delivered; trumpeted in a monologue in the intro and explicated in the spare but stunning title track. It's for the best that he doesn't let the album get any more tripped up in philosophical dissertation because it's plenty substantial with meaty poetry and bars for days over his indie-rock infused alt-rap beats. Outside of the skits and "Nice Day", most of the songs compile his singles and releases from the last few years but it does all coagulate beautifully into a melodic and lyrical mosaic, produced mainly by him along with some notable contributions from Asend, Kordisepz and just a couple others.

"Jaime, Let's Go Get Diana" and "Brown Skinned Martha" show that there's still no one better than Grease at depicting the 3rd generation Riverside Mexican late capitalism era stoner kid milieu so unpretentiously in hip-hop form than him. It develops the down to earth relatable rapport he nurtured with listeners on Herbalistics music. "Go On & Cry" depicts Grease at his best: being irreverent, insightful, cynical, funky, and true to himself.

Even though the album goes from the disrespectful "Cypher Effect" style stomp-your-face verses of "The Sickness" and "Corny Rappers" to the sweet hipster song tinged "Rock Fights" and "Martha", it doesn't feel disjointed. It feels true to how men are here and now and I mean that in the best way such a sobering truth could be meant.

If "Corny Rappers" is his greatest fuck-your-life barfest, "Never my Love" is his greatest deep statement-about-love-in-the-form-of-a-3-minute-song poem; produced by Asend it's a masterpiece of confessional yet concise rhyming and melody. "One for Big Lou" is Greaseball's secret origin, his penultimate ode to his father, and another of his greatest works.

"Nice Day" hints at the exisentialist zen-stoner trickster Grease may be becoming in the future. The fact that he even delivered his long-awaited LP can't help but give us hope that the Burgundys, Herbalistics and Strange People EPs and LPs will come to fruition as well but in the meantime Greaseball delivered an album with a philosophical thesis which bodes well for the promise his existence has always implied; the promise of a new southwestern Latino beatnik rapper Kerouac who could spit well about the scum and sugar right outside all of our car doors. 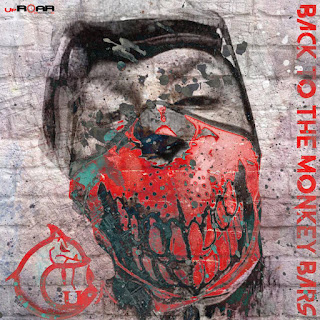 Cuda- Back to the Monkey Bars

On the opening song "Just Cuda" he slyly reintroduces himself, his wary outlook on the modern world, his playful openness and soulful musicality and poetry. On "L's Matter" he goes into mind-bending yet undeniably insightful commentary on race today and not at all in the same predictable ways. He shows how complex our political discourse can get even in rap(!!) by infusing his Californian multi-cultural love with his spirituality into our society's internecine conflicts.

"Queen Me" is a Lion's roar calling for his mate and the bars and clearly communicated contractual suggestions had me bobbin' my head and nodding along in no time!

On "Soul not 4 Sale" he bars out on a banger while explaining how he balances his walk with his pursuit of artistic greatness. He is consistently impressive with the kind of discussion he can write in your mind in the confines of 16 bars. His voice is unique and his pen thoughtful. Like anyone on Uproar, he is an artist determined to not waste the opportunity to keep your attention-peep the tape from one of the calmest yet deepest Jedi I've heard on the mic.