From Mayweather to Marshall Mathers: Race and Historical Revisionism in Hip-Hop 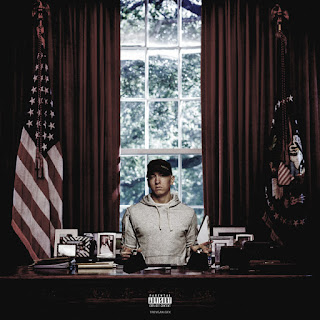 I’ve never been into sports (shocker). The dynamics of sports fandom always shock me in how bare they lay the folly of man. It tripped me out earlier this year when the Mayweather/McGregor fight happened and life felt like an SNL sketch: all the black sports enthusiasts I knew wanted Mayweather to win and all non-black enthusiasts wanted McGregor to win. What felt like an SNL sketch is that these are consistently the lines along which people were aligning but everyone had detailed ESPN ass explanations for their thoughts that never addressed race. Like we were all walking around acting like race wasn’t why we were aligned the way we were. I honestly wasn’t aligned a particular way and ended up seeing the fight at a cousin’s house almost by accident.

Since the initial reaction to Eminem in 1998-2000, I hadn’t seen much of the same kind of polarization about him until recent years. Most of the hip-hop artists I know including many of color are proudly influenced by Eminem. We’ve seen a generation of multi-ethnic battle rappers grow up on Eminem as well as music making rappers like the Game and more. In recent years, coinciding with the Obama years and the growing acceptance of the idea that systemic racism still exists pervasively in the west, this has shifted greatly.

Younger hip-hop fans of color often discuss him as a Weird Al type joke, an old weirdo who talks about chopping up his mom and wife and other Wypipo shit. Now, right alongside a revolution in how we think about institutional racism, there’s been evolutions and revolutions for feminist discourse in the mainstream in recent years as well. The feminist revisionist view of Eminem has been a conversation that’s played out much more publically: Eminem is super problematic and ultimately a stunted man-child spokesman for Columbiners and directionless young men everywhere. If young hip-hop fans were coming from this direction in their critiques of Eminem wholly, I’d have cottoned to their critiques sooner but given how much horrible man-child content comes from a lot of lauded new rappers it surprised me when I slowly but ultimately came to the conclusion that the new young hip-hop fan of color’s rejection of Eminem is a progressive political development.
It has been agreed upon for a while that there are people as barsy as Eminem of color that didn’t get the shine he did because they didn’t look cute and pale. It’s also agreed upon that Eminem didn’t move hip-hop topically to a good place though he did move it to a new and original place. He expanded the transgressor personality of gangsta rappers into a version of it that white people and other poor people in general that were not gang affiliated thought they could adopt and they did. Eminem probably deserves some blame for the nature of hype-beasts and fuckboys in the modern era too but I digress.

It is celebrated when Moonlight wins an Oscar against La La Land, when the Grammy’s don’t nominate white people for best album and other important but not important cultural moments. Eminem’s legacy is being revised with such an angle and it’s okay, it’s for the good of society though the rapid change does leave his fans of color looking a bit a shade of Uncle Tom-ish. I don’t think we actually are, but I see how it looks that way. In retrospect, Eminem’s rise portended Donald Trump’s rise. Rap didn’t know where it was going post-2pac and here were directionless white men saying, “we want to be bad-asses too, we want to brag about our transgressive behavior too, we want a way to express our anger, disillusionment and ennui with society too” and Eminem gave it to them. Dr.Dre was a genius for seeing this.

Apply the metaphor to 15 years later and American politics was asking itself where to go after the Reaganism on steroids of governance of W. Bush and the updated Clintonianism of Obama (not a knock, just the reality Obama had to deal with). There Trump was, an Eminem to the parents of grandparents of suburban white Eminem fans, saying “yes you too can say what you want and it can be offensive, you can ‘keep it real’ and be crass like the Hollywood that disrespects your whitebread Christian lifestyle”. Given the economic environment, none of this should have been surprising. When oppressed people aren’t prepared to seize a moment (and there are legit structural factors that explain that, not a knock) white directionless angry people will fill in the cultural space.

American politics has since been recapitulated to soothe the anxieties, fears and hates of old white people. End of the day it’s because they showed up but it doesn’t make it less whack or much less unjust. Minorities didn’t stop having problems, they just weren’t in a MLK or Rodney King riots moment at the moments Eminem and Trump seized the spotlight which is apparently what it takes to create a cultural opening that can’t be co-opted by white people (well when you factor in Sublime, mostly can’t be co-opted, natch).

I don’t know what the larger solutions are to all of this but I do suspect that if Eminem’s rise in our consciousness was a prescient symbol of things to come (the re-emergent dominance of white men’s problems as the central focus of art and American politics), then him being brought low could perhaps portend the end of those things that came (white backlash). I sometimes suspect that Eminem is emotionally intelligent enough to be grappling with that on its deepest levels- that its just and right for him to be downgraded in retroactive evaluation as part of a larger and ultimately good societal shift in values and priorities. The awareness of white privilege is at an all-time high, young intelligent people of color are tired of the lower standard for white people, how easy it is for them to get props for stuff more vulnerable populations work unrecognized for decades at, and just the sheer number imbalance. End of the day, they could probably strongly argue that there’s nothing white people get recognized for that a more deserving hard up population member shouldn’t be getting recognized for, based on the merit and the politics of the moment.

I’ve been accused of white appeasement when I bring this kind of thing up but my only concern is for accuracy. If I’ve been defensive of Eminem it’s not because I Stan for him, I really hardly listen to him these days; but because it seems inaccurate to me to downplay his accomplishments and skill. As someone who is interested in cultural egalitarianism, Black Liberation, Reconquista, feminism and other progressive movements, I think it’s important to be accurate when we attack undeserving lauded whites and Eminem just wasn’t at the top of my list. I now realize the folly of my ways- Eminem is an easy but important target to take down a notch for the larger cause of not awarding white people for doing 75% of what other races do and being treated like an innovator (not that Em is that necessarily, but as his career becomes more checkered with hit or miss releases, he becomes a symbol for overly praised white mediocrity) and the cause of not letting white men take over the national conversation just because they have an angry untended-to boner.

So I relent and admit that the cause of historical revisionist downgrade of Eminem and his work is a societal good but I would humbly request to the cultural victors that they show a little patience with Eminem fans of all color as they gradually come to the same conclusion. We’re not trying to be Uncle Toms. We’re just older and in the year 2000, it was seen as a victory for racial harmony that for one of the first times since the Beastie Boys and House of Pain a white rapper was seen as very good at hip-hop and poised to take over the world commercially.

Post script: a wrinkle in this I think about a lot is how generally (I swear to god I know this is a generalization please don’t crucify me for this) black music audiences are on the pulse of new work while basically all the other races fandoms gradually catalog the best of what happened in the decade prior. So I was 12 years old in the late 90’s, studying the works of Dr.Dre like they were a Mark Twain collection, assembling a cache of albums already known to be classic and studying them as such while my black friends listened to all the new releases like Cash Money and Project Pat and debated if they would later be classics. So we’re in this moment where Latinos and whites love Eminem and the whole Dr. Dre gangsta rap/g-funk/boom-bap/skribble jam paradigm he came out of while savvy black music fans think of this kind of filing system hip-hop fandom as white, out-of-touch, nerdy, passé. 90% of the Latino rappers I know are blatantly influenced by Eminem, my self included. This adds pressure to the historical revisionism debate from two directions: 1) black fandom becomes increasingly aware that not only are whites but now Latinos are particularly defensive of the air and attention sucking Eminem and 2) Non-black fandoms circle the wagons in defense of the star that showed them you didn’t have to be black to be a cool hip-hop type. So there’s an interesting and arguably unique confluence of tribalism, revisionism and just cultural difference in how groups of people process and assess music. White westerners are obsessed with a canon: a set of material agreed upon as classic whereas those who reject white western-ism, often black youth, are obsessed with the opposite: the vibrant and surprising pulse of the new and this disparity further creates the divide in opinion. I personally think this is great as long as we are aware of it and charitable to each other’s differing sensibilities.