DERELICT DIALECT: A REVIEW OF VERSA - THE OPPOSITION 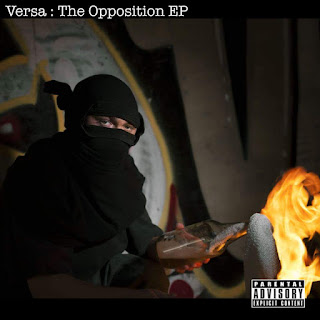 Derelict Dialect: The Opposition EP by Versa of Abstract Illusions


When you hear the delicate, slinky and somewhat evil guitar lines of the Opposition’s opening you can’t help but be skeptical that the MC that rides it will be able to do it justice. “You cats ain’t ill, just got networking skills, but me I keep it real” Versa bellows as the beat kicks into a dirge and a jaunt simultaneously. Versa’s every line is scrappy and in-your-face without relying on shock-rap horrorcore tactics.
Andrew Petrich’s album art depicts Versa as a freedom fighter with a Molotov cocktail. Upon earlier listens I thought this was a political statement, but after hearing the album more I have come to the conclusion that it’s more illustrative of his disdain for what he sees as a flawed poppy paradigm in modern hip-hop.


When you stop caring about timeliness, the time is right for your record. The Abstract Illusions are a large hip-hop collective based in the Inland Empire and Versa is their pitbull and tenor soprano all in one. He performs more than ably in their ensemble act but hearing him alone on this EP produced by former Illusion ErthOne really launches him into the musical stratosphere in my opinion. His lyrics are an aggressive blend of I.E. ne’er-do-well life mixed with old school hip-hop and rhyme busting.


“STEADY RIDE THE BEAT TO GET THE STRESS OFF MY BRAIN


Musically the record reminds me of an Illmatic or Reasonable Doubt that’s more reliant on guitar than piano samples. There’s even a song (“Honorable Mention”) that uses the same loop as Jay’s “D’Evils”. The drums are gritty and booming yet crisp. I particularly admire how Versa’s vocals are mixed. They are layered in a way that amplifies his voice without losing clarity. His voice and rap persona is familiar yet refreshing in its earnest craft. Which leads me back to what I was saying earlier about timeliness – Versa’s record delivers for fans of 90’s hardcore boombap despite having come out circa 2014. The Abstract crew doesn’t care about the day’s trends- just coming hard with what they do.


This record is full of attitude so real it would melt your car stereo meanwhile ErthOne’s beats envelope the whole thing in a melodic and always catchy aesthetic. It’s one of those records where the beats are so good that you are sad to hear each one end and then are immediately ensnared by the next one. Every drumbeat is insistent and Versa kills solid vocab over each one, completing the sound. “My Steez” is a stand-out – “I keep the liquor in reach to keep my cypher complete” being the chorus to that song, is a good example of his lines – hedonistic, simple, yet elegant and hip-hop through and through.

“MUTHAFUCKA PLEASE, YOU CAN’T FUCK WITH MY STEEZ….I KEEP IN THE LIQUOR IN REACH, MAKES MY CYPHER COMPLETE”


Versa’s bragging ranges from violent threats to MC braggadocio but he tends to keep it firmly in the MC arena for the most part, indicating his prioritizing of hip-hop and its values. His facility with language makes the record timeless. I fail to see an era it could have been dropped in and not succeed on a sonic level. The 8 track EP has endless replay value. In fact, I’ve been listening to it for over a year really trying to digest what I like about it. 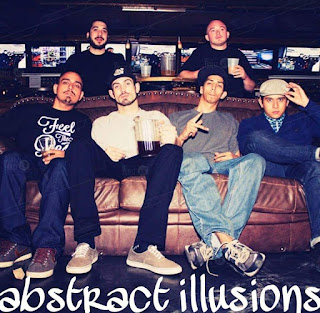 It’s sort of like punk rock or metal in the sense that at times the album is pure energy, the music allowing you to maddog the shitty out of your day. It reminds me of a less political Ice Cube, or Nas meets Beastie Boys in its intensity, rhythmic deftness, and lyricism. While Versa keeps it raw, he never overly delves into extreme gore or boring and gross sex rhymes. My guess is that this is because he’s a fucking adult and Abstract Illusions are part of an army of Inland Empire artists here to assure all of us that there’s still plenty of gritty rap for just that demographic.