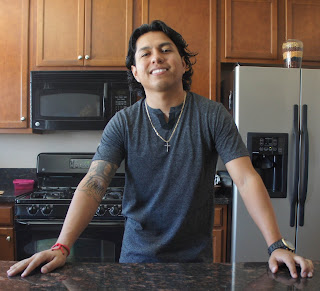 JooseBoxx.com's newest segement will be text interviews with people we feel you should know. Check out our first installment with the homie from up the hill, Arley.

Arley: I'm Arley from Victorville,CA and I'm an opportunist.

OK so whats new for the clothing line Beyond Aware now that you have been doing it for awhile?

Too be honest not much, as far as releases. We decided to take a step back in order to learn the business aspect of having a startup company. We still create but just haven't released anything do to not having proper paper work. Since this has been an on going project it would suck for someone to take our idea because lack of preparation. Everything is good and ready to go now though

Where too start!? We have a new drop coming called dial-up which is just a statement to everyone to prepare for some next level shit from here on. I've been designing and plotting for the last few months on the low so I have a full catalog along aside with plans ready to go. Also once the time is right we want to open our own boutique that way we can bring something to the local scene. I'm excited to see it all come to life!


Besides BA, any other projects or plans Going on?

Yeah I'm always working, I've truly embraced the independence as not only an artist but also a business man. I've started my own marketing firm which has been taking off and given me the freedom to be self employed completely. Definitely a blessing. I'm also working on a tape called "bluescholar" which the militia team has been helping me put together. It's an idea I've had since 19 but timing is everything especially when creating. In between all of that I find time for my education. I'm only 6 classes away from receiving my Bachelors. Can't wait to get that out the way because it seems like I've been in school forever.

Why do you do what you do?

For my family, friends and community. I want to show that anything is possible if one sets their mind, heart, and hustle to it. As cliche as that sounds but it's truly the only way to prosper. The day I asked myself why not me is the day my aspirations turned on.

Who or what inspires you And why?

A lot of people and things inspire me. I'm a student of life so i find it everywhere. One day I can be watching Tupac interviews, Kobe highlights, listening to music, have a conversation with friends or strangers, read a book, try food, or see a painting and feel a certain type of way. I mean life is too active to just be allowed to be inspired by one so You got to be open but also know your ground.

What are your top three factors you would attribute to your success?

First it would be my faith. Not only in god but in myself. Two, It would have to be my team. I have been blessed to have supportive people stand by me and work together for the bigger picture. Three, I would say the hustle that I was born with and learned from watching my parents. Nothing is owed too us, we have to go out and get it.

Tell us about your biggest fear and failure ?

I would have to say my biggest fear is not accomplishing my purpose in my lifetime. I mean .... what more can you fear if we are all going to end up in the same place sooner or later. As far as failure , I constantly fail but I look at them as learning experiences now. One thing I do know is that my biggest failures come when I rush so I'm learning to be patient and take my time.

If you can change one thing about this world, what would it be and why?

It would have to be egos. I mean it's OK to be confident in yourself and hold a standard but now it has simply turned into a monster. Everyone thinks they are a public figure and can do or say whatever the fuck they want without thinking of the repercussions. So if we could tone that down I believe less jealousy and hatred would exist.

In the next 10 years where do you see yourself?

If I get blessed to live 10 more years I would like to start an actual non-profit organization, I say actual because many people start one for the grants and live comfortable off of those funds which they are just taking advantage of the system. No, I want to be self funded where I can help not only the youth from my country but others as well with resources they lack. So I don't know physically where I would be but I know what I will be doing.
at 1:20 PM Labels: Arley, beyond aware, The Sit Down