Review of Calligraphy's "The Pessimist" Album 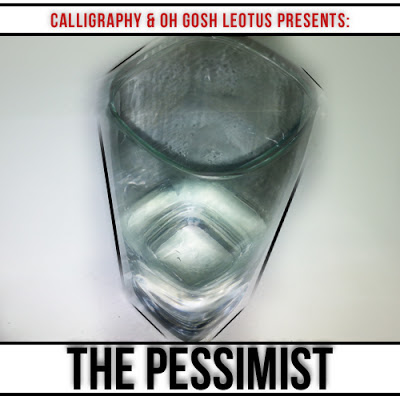 JooseBoxx.com brings to you another in-depth review. Calligraphy also known as D.J. Calligraphy, resident D.J. of I.E. hip-hop landmark The Common Ground, gives us his debut project The Pessimist. Produced entirely by Kill That Noise Beat Battle winner Oh Gosh Leoutus and featuring the talents of Hardwerk, D'zyl 5k1, and songstress Samantha J. Here it is after the break...

"I think I'm falling, somebody grab me."

fitting for an album entitled The Pessimist. This song goes on to deal with matters of self-worth, the meaning of life, and various other feelings of discontent. I will say if you want to have a generally "happy" day, this may not be the song you want to set your alarm to. Calligraphy definitely airs out his personal feelings with this one.

Puppet Master tackles the age-old debate of destiny vs. free will. I enjoyed this track far more than the previous and i have to admit it's because this song includes the listener by asking questions of us...  some very deep questions and very meaningful ideas to consider. This has elements that make this tune feel like a conversation between Calligraphy and us, the listener. Puppet Master has a certain wittiness to it, I like that.

The first single! Oh Gosh really did his thing on this joint. The beat sets the mood at all times for this song and like fine ingredients only work best while under the crafty hands of a great chef, Oh Gosh's beat and Calligraphy's lyrics complement each other in a way that i don't believe either would accomplish by themselves. For anyone that has heard or seen this performed live, you may be like me and wonder... WHAT THE FUCK HAPPENED TO THE CHANT?! one of One of my favorite parts is the "Where we at homie, homie, Where we at?.. I.E.!" yelled during the choruses at shows. I get it though, the interview style speaking on the album version of the hooks probably wouldn't bode well in a live environment so the chant was NEEDED, but damn... that was one of my favorite parts. Reality Check is the third time in three songs a self proclaimed atheist aims his sights at religion. By now, the topic has been beaten...to death...and then some.

If you don't know, Icarus is the ancient Greek myth about a boy who was made wax wings to escape imprisonment and given only one rule to abide; Do not fly too close to the sun. Icarus was an arrogant lil shit and he didn't listen, the sun melted the wax wings, and he fell to his death. It was his straying from his primary objective that lead to his failure... All very important information to know in order to properly absorb this song. Ultimately though, I feel the song is open to interpretation and is probably multi-layered.

my nigga the sky's the limit

and on the wings of Icarus

i made my ascent to the sun

but only to fall short

but understand as i fell to the ground

understand, i was just tryna chase my dreams"

It seems as though Calligraphy doesn't like City Lights... and neither do I. On the surface, It seems as though he desires to go back to a time before the city lights crowded our view of the night sky, any meanings beyond that i couldn't find. This track is skippable.

This is the kind of storytelling song I enjoy most! This song gets personal. One can only wonder just how true this song and how much (if any) artistic liberty was taken to create this sonic glimpse into Callig's life. The structure of this song is DOPE, i can imagine walking up to Hardwerk and Calligraphy deep in conversation and just listening....THAT is what this song is. Hardwerk offers his advice while commenting:

i just know a couple things simply from being me"

Calligraphy's 2nd verse is the star of this track as he paints a vivid picture of a relationship from birth until death with Oh Gosh Leotus providing the canvas. The beat is ill but i could have done without the vocals in the sample, i feel like they took away more than they added.

aka Songbirds Pt. II. Songbirds was like a dope episode of The Walking Dead, or Breaking Bad, or Lost....it got me hooked! Coffee for one is a welcomed continuation of the story we began in the previous track. The piano and horns provide a melancholic atmosphere that fit well with the subject of missing that special someone you let go. This is one of the standout tracks on this album.

Dare i say it? Drift Away aka Songbirds Pt. III (the Prequel) Featuring none other than the leading lady of the story! The vocal inflection and sing-song rhyming on this song are a nice touch to the melodic beat. Samantha J's singing is fucking beautiful. I hear a lot of emcees attempt to grant local singers the chance to grace their projects often resulting in shit... this is not one of those times.

Another song Calligraphy performs. This is the first time Oh Gosh Leotus' beat overshadows Calligraphy's work. I would have probably bumped this track even if it was an instrumental. This is a cool song but if not for a music video i couldn't see myself playing this song again (unless i wanted to hear the beat again). Maybe because the subject matter is so intimate... this might be one for the ladies. i don't know, i DO know it doesn't do anything for me.

This song is the Yin to the Yang of Incense  Oh Gosh's minimalist beat is grossly overshadowed by Calligraphy on this one. This is one of those "Going in" tracks, not really about any one thing but instead a demonstration of skill. I can dig it.

Here we go! We have resurrected balance! Oh Gosh and Callig have restored all that is right in their partnership. The beat is so bluesy and modern.... THAT SYNTH is the shit! I think the hook sorta stumbles on the beat...maybe slip would be a better word. It just doesn't click as well as other songs on the album. I also feel like Yellow Roses should have somehow fit in with what I'm going to now call the Songbird Trilogy. This joint's message is pretty ill... Callig talks about how he compensates being a reformed asshole by showering his new chick with attention and yellow roses.

Geekdom! That Super Mario Bowser Castle music is a nice touch from OGL. This song is ripe with ill double entendres, allusions, and allegories. D'zyl did the damn thing with this one! If you are a Super Mario fan you have to check this out!

Although i personally like this song, it does scream out "I don't belong here", the black sheep if you will. Nevertheless an upbeat outro.

This album is not for everyone. If you are looking to turn up, this is not for you. If you are looking to find music that will make you feel good about life, this is not for you. If you are looking to celebrate God's glory and all things holy, this album DEFINITELY ain't for you. But this album is for those people who like to peel away the layers of a song and find meaning in the lyrics and in between the lines. The Pessimist takes pictures of the inner cogs that make Calligraphy tick and fuses those images to a beat. Oh Gosh Leotus really pulls his weight providing some of the dopest production while Calligraphy bares his soul. Hardwerk, Samantha J, and D'zyl 5k1's cameos are great and add to an already stellar debut album.

You can purchase The Pessimist HERE
at 1:36 PM Labels: Album review, Calligraphy