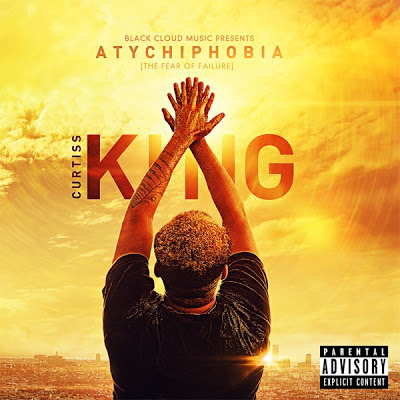 JooseBoxx.com brings to you our review of Black Cloud Music’s latest project. The I.E. icon known for his on stage performances and long list of production credits, drops his first album on the heels of his “Kings & Queens” short film which documents the weeks leading up to the Paid Dues Independent Hip Hop Festival. The much anticipated album "Atychiphobia" by Curtiss King is finally here…

The Sweeping synths that open up this song really give the joint a panoramic feel. A bigger picture swagg, if you will. Bee Tarver really holds it down on the vocals. The combination of her voice and Villain’s beat really compliment each other. The mysterious voice at the end further solidifies what I’m sure will become a debate for many years to come…. Is it A-Tik-UH-Fobia or A-TiCH-Uh-Fobia?! Curtiss definitely says it with the tick… MV (Mystery Voice) says tich. I don’t know. I’ll tell you this though, if you skipped this song, you wouldn’t be missing much and I’ll explain more about that in a second.

The Fear of Failure (feat Art Barz) (Prod. By JBizness)

To digress for a second, the songs Atychiphobia and The Fear of Failure seem redundant to me. There will be some who disagree but I think its like buying Coke and Pepsi…. Some people need one over the other while others (like me) only see cola. I prefer The Fear of Failure. The catchy hook had me the first time I heard it. Fellow Black Could Music artist Art Barz lends himself to the joint and to keep it simple… it works.

This will definitely speak to anybody who dreams of being a successful musician. This reminds me a lot of how the movie 8 Mile made me feel the first time I saw it. The concept of “being close to your dreams and watching how those around you change” certainly isn’t new but its rare when that concept is tailored to a specific relatable craft like being an emcee AND is done so well. It’s hilariously ironic that the sample on the tail end of the song sums up what I’m trying to say…

Do you really have to fake it ‘til you make it? Can you pull a ratchet or two if you feeling bummy? I have always invested in the theory that you most certainly can! If you agree this song is for you. I think Curtiss King aims to make “keeping it REALLY real“ cool. Bullseye.

First and foremost this beat is ILL. Mad love to Jansport J for doing the damn thing! it’s a beautiful thing when the beat and lyrics of a song come together so nicely. I could not imagine this song any other way…. In my opinion, those are the makings of a CLASSIC! I mean that in every sense of the word. This song is definitely one of my favorites! The highlight of this song comes late in the second verse, in which Curt explains how his “lady gave him balance”. This song is a MUST listen!

No Negativity Around Me (feat Jynxx) (Prod. Ayiro)

The part I enjoy most about this song is the insight into how “Life after Paid Dues” has affected Curtiss. Black Cloud Music’s Jynxx (often behind the scenes) lends his voice to this track, giving us a nice little change up from what one might expect of him. I’ve been around Jynxx more than a few times and probably have only heard him saw 5 or 6 words but you definitely get the full effect of his identity as an emcee on this track. In closing, nice song, ill solos at the end, and cool production.

Alori Joh is vicious with the vocals… She definitely has a powerful and beautiful voice. I think the standout second verse which explains how Curtiss feels about his friend Alori who passed away in early 2012. This is a very deep and powerful verse and I probably could have done without the first verse entirely. I know putting your inner most feelings in your music for others to judge, and comment, and talk about is no easy task and I commend Curtiss King for opening up as he did with this song. The words he speaks on this joint could very well lift someone from a dark place in a time of need. May Alori Joh rest in peace.

Upon first listen I instantly felt Osym was channeling Timbaland with this track. It sounds a lot like My Love by Justin Timberlake featuring T.I.. Mickey Taelor holds her own. David May is definitely staking his claim as one of Black Cloud’s young up-and-comers. Although it is a cool song…this track is skippable. I couldn’t find anything “special” about this track.

Another standout joint by a duo I’m beginning to really become fans of; Curtiss King and Jansport J. I always find it a privilege to hear these intimate glimpses into an artist’s personal life. Especially when they feel as real as the ones on this project feel.

Again, Curtiss hit’s the nail on the head with a reboot of a common theme. This is the “I need a ride or die chick” mixed with reality and a dash of “smoothed out beat” provided by OhGoshLeotus and a pinch of the raw stylings of Noa James. I love the concept but I could have passed on the singing ant the end. It’s just not for me.

Osym strikes again with the type of abstract beats I live for. Listeners are treated to another cameo by a Black Cloud Music artist in Phantom Thrett. I like Phantom’s interesting dynamic as an emcee/singer and how different he sounds when he leans towards any given talent. All in all this is another standout track on the album.

I’m not one for sad songs. This song is like getting kicked while you’re down. I’m not really feeling Brooke Taylor on this joint either. Definitely a “skip” for me.

One of my favorite songs on this album. A triumphant song indeed. Whether you hear the song with the disease in mind or how people can be cancerous. The title says it all. Villain truly outdid himself with the production on this song, it captures all the emotions and feelings associated with winning. This song and it’s various messages are ULTRA-relatable. Bang Bang.

Sade.Badu.Jill (The Remedy) (Prod. By Villain)

One of the best parts of this song is during the verse when us listeners get yet another glimpse into the soul of Curtiss King. Anecdotes of being the odd kid take you to those very playgrounds. The storytelling in verse one is great.

This beat is amazing! The story, the message, the feelings this song conjures in my heart… truly a beautiful piece. Black Cloud emcee Faimkills’ lyrics gracefully meander up and through the melodies of this track. Even Mr. Mystery Voice at the end adds a certain sense of completeness to this song. I could hear this in movies or on TV shows or something. Awesome shit.

I know I can’t be the only one surprised that we went 15 tracks deep into this album before we heard some Curtiss King production on this thang. Curtiss gets all sultry voiced with his rendition of Mokenstef’s He’s Mine. Grizzly-ass flip! On The Grind! I really enjoyed it and I think you will too!

I find it gratifying that mainstream artists recognize the skill and hard work coming from this man. I love Curt’s verse on the remix, it has a lot more personality in it. I also think it was a good move to lighten up what otherwise would have been a very serious end to the album. Glasses Malone and Hit-Boy add very different and distinct dimensions to the song. I know, Glasses Malone and Hit-Boy are a strange combination but hey, it works for me.

The album is dope. You can’t walk into this looking for many hype songs like Sinbad, but what you will get is a peek into what makes a man like Curtiss King tick. You will hear the gears and cogs that make him who he is, though song. There is a mystery voice that makes an appearance every song or two, that’s… different. I think this is history in the making.

You can purchase Atychiphobia HERE or HERE