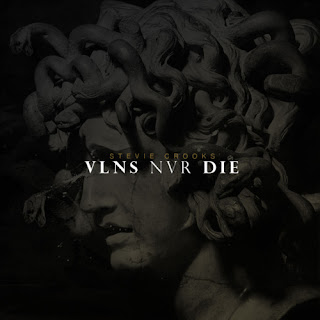 Okay so I first heard about Stevie Crooks a long ass time ago. I hink I was on UTB’s blogsite and they had put up a download link to his mixtape. I’m kinda upset with myself because I can’t remember the name but I remember it had an asian/Mexican looking chick on the cover with a bandana tied around her head. If yall been on the scene for a minute you know what I’m talkin’ about. It was so long ago that I honestly can’t even remember if I liked the mixtape or not… So I’m going to treat this like a first time listener’s experience. Since the release I’ve had the opportunity to see some live performance footage from Crooks and I’ve been impressed but let’s see what he sounds like on wax!...I’ve also been told that he did the majority if not all of the production on this joint so imma keep an ear open for that as well.. Alright.. enough of my thoughts… *presses play*
Anti Hero
Okay. Feelin’ the vibe so far… When Crooks start spittin’ I can’t help but nod my head! He on that raw shxt. I see you. Wasn’t really able to quote anything said tho cause I was enjoying the delivery. No hook on this joint? Felt kinda empty for a second. Shoutouts were a little random but shxt! I feel …Say whassup to ya boys ::shrug::… still think a hook woulda been better even with the shoutouts there. Killed that 2nd and oh..that third.. let me quote you right quick…
Poppa Was a soul train dancer


Momz was a baby black panther


So its only right to pounce on tracks

That’s different! I like it. From listenin’ to just this track I can definitely hear a Nas-type influence…I wouldn’t be surprised if Crooks knew all the words to Illmatic. I’m feelin’ it tho. It’s that raw hip-hop! Don’t hear it too much anymore. Dope track.
Darkside ft Xavier
Hmm beat is cool….hasnt really caught me but let’s see where it goes…Intro adlibs almost made me press next on this joint but I’m patient. Oh okay! There we go…. Vocals came on and the piano did some beautiful shxt. Smooth. Delivery is killin’! Not sure if this is Crooks or Xavier tho. That can’t be good! I almost wanna go back to track 1 just to make sure it’s still Crooks. Blame my horrible memory I guess. ::shrug:: 2nd verse delivery fell off a little bit tho. I found myself losing focus and interest quickly. Don’t know how I feel bout the little boy talkin’ bout the darkside either but that was kinda cool lol.. What’s next?
Empire Strikes Back
Okay I get the theme now.. Duh! I’m guessin’ this whole thing is gonna be dark sounding… VILLIANS! Smh.. my bad. Shoulda put two and two together…I got it now…
The black man got it hard enough


Economy make these young niggas harden up
Honestly…I don’t even think Cali ready for this shxt!! This some raw street type shxt….Beat is simple and repetitive but it allows the vocals to stand out. Hopefully the listener can focus on what’s being said. Deep shxt. I missed the point of the skit tho.. my bad…imma go head and press next

Gem Star
Whoa whoa whoa.. run that back! Got damn Crooks! My head noddin’ again…. This sound like some shxt Raekwon would spit a second verse on! Wu-Tang forever?! Lol. I hear it clear as day! Oh yea.. Just heard Crooks say “Shaolin”…I’m 100% sure that Wu-Tang is another influence for Stevie Crooks. That’s a good thing! Once again… this is some different shxt to hear in Cali. I’ve been hearing the same type of music for months now from our state’s artist. This got me feelin’ like I’m in Brooklyn or something. Enjoyin’ where it’s taking my imagination.
Grimey Couture
The hi-hat and snare choice on this joint is turnin me all the way off.. Hopin’ it switches up…. Luckily the sample did…..them drums tho!....Guess I’ll just have to deal with it..
I drop jewels when I rhyme


Can I be your Jewelist?
Uhhh…I don’t know bout that one…. Not really feelin’ the hook on this joint either. Grimey and Couture lowkey have no place in the same sentence in my opinion. I’m tryna hear the Couture part of this record too…Havin trouble.. Crooks got the “grime” down pact tho!
California raised, with that New York steeze
You ain’t never lied! That’s exactly what it is… I CALLED IT! Lol…
Grimey Coutoure ,this is rhyming greatness


Nikes on gold-plated floors with Versace floors
Okay. See I feel that. Good definition of what “Grimey Couture” is! I kinda missed that feelin’ for the rest of the track. Let’s see what’s next.


Material Girl
I’m feelin’ this…. Bouta start it over…. The beat is drawing me in and Crooks lowkey singin along which got me vibin’ even more…. Beat dropped… dope shxt!... Delivery crazy….Had trouble focusin’ on them lyrics again tho! That’s a big thing I listen for with music… I want to relate. I know Crooks is saying some deep ass shxt but I’m kinda disappointed that I can’t go on google and look up his lyrics. I guess. I think I woulda enjoyed the track a little more. Hook is the shxt tho!... I’mma rewind this shxt just to hear the hook over ::shrug::….


Glad I rewinded this,… That second verse killin’!.. Good shxt Crooks!
Newyorkafonia
Ooh! Can I have that piano for CHRISTMAS?!!! Beautiful! Them drums need a little work tho.. You got the vibe right but I can barely hear em… With that piano my nigga?.....shxt! Drums should have my neck broke by now! & I must say… the art for this track is beautiful….Shoutout to Crook’s graphic designer… Ive restarted this track like 4 times.. let me focus this time!
I’m so California, but I’ve got the soul of New York
I feel you on that! I’ve been told the same thing… Ive always felt like New York niggas wanna come here and we wanna live in NY… It’s like two different worlds tho. I hope to go one day. But anyway…First verse pretty nice…Second verse dope! Makes the track’s vibe turn into a love song to New York a little..but you still showin’ Cali love…so it’s a nice mix…Another thing… The mix on all these tracks have been clean as hell! I’m jealous and I need to meet your engineer lol Good shxt!
Outro? Naw… I’ll listen to that last…
Punishment
I heard about this track but never got the chance to check it out… lovin’ the sample…oooo even better when the beat drops…*rewinds* Hell yea… Props on the production.. I love bringin’ in beats like this so I’m so glad you did it.. Smooth shxt. The flow is reminding me of Big L meets Jay-Z meets Mobb Deep. .
It’s the dark liquor sipper ,West Coast MethodMan


You got me backwards you KrissKross niggas
Oh shxt! Alright.. I’m impressed…The flow is honestly on some classic shxt …I mean…that’s just me being honest. I mean here and there Crooks loses me but when he on… HE ON!

Street Shark
Hmm don’t know if I feel the hook…wish a male singer woulda been singin exactly the same thing Crooks was…. Verse got my mind runnin’ wild tho. Feelin’ like Stevie bouta paint a picture with this one..& that’s exactly what he’s doing…I’m hearin’ that Jay-Z flow tho.. & this reminds me of some BluePrint type shxt too… When I close my eyes, I imagine Jay-Z rappin’ but Crooks voice comin’ out.. Ain’t that some shxt? Oh Okay.. Heard a “Reasonable Doubt” shoutout in there lol.. So this is on some Jigga type shxt.. I feel it!
Submarine
Beat sounds like some mixtape shxt….Fuck! Now I keep hearin’ Jay-Z in Crooks flow….Whatever! Cruise music? Yeaa I feel that.. I could imagine ridin’ round to this thinkin’…bout…shxt… life?! ::shrug:: I’ll save the rest of this for then… *presses next*
The Crooklyn Bridge
Sample is beautiful…Got damn Crooks… This shxt reminds me of a James Bond love scene. I’m feelin’ the spoken word. Real shxt.
The Legend of Perseus
Hmm Perseus…Perseus… sounds so familiar but I can’t remember who he is.. Hopefully Crooks tells me in this track…


Hmm guess not…lol…damn on some real shxt I just fell asleep.. NO DISS… but this shxt so chill that I relaxed all the way and dozed the fuck off my nigga.. my bad…Weird shxt is.. I woke up when you said “Hope yall still listening”.. I’M UP! … Love what you sayin’ at the end of this record tho… That’s real shxt. You be speakin’ that real and I respect it Crooks!... I usually can’t stand dudes cause they are the farthest from “real” and I can spot the weakness in them from a mile away. ::shrug::
Therapy ft Terrence F. & Jay Deboi
Okay…imma vibe with you..
Why front? I’ve been wantin to touch since jump
This shxt sexy as hell.. Oh damn.. beat just dropped and I wished you woulda made this shxt for me! Lol I’m diggin’ this shxt.
WAIT! THIS HOOK IS ASS! ….::shrug::…lol
Okay Terrence F. on verse #2(What’s good! Lol)… Hopefully he can take my mind off that hook I just heard lol Yeaa….good shxt. Got me vibin’ again. Straight ass verse Terrence!... Second hook bothered me less but still irkin’ on my subconscious mind… Jay Deboi’s turn… this is my first time hearing of him… okay okay I’m feelin’ it… flow fell off a little but Jay got the vibe still goin’… that whassup…


Cool track yall.
Tornado
Okay.. Tornado sounds. Got you. Creative…WOOOOOO!!......Ugh! the flow givin’ me chills in my back…That’s a good sign.. perfect for the beat… I gotta see this performed live… Kinda wish there was a switchup or something to keep my attention a bit more but Crooks definitely killed this shxt.
Outro
Haha you just described me! Well up until the killing niggas part. More “real” shxt from Stevie… I feel you. I live by the “higher standards” you’re speaking of. It sucks to see these young niggas out here actin’ the way they do. Like they ain’t got no fuckin’ sense! Excuse my language… But LOVE THIS OUTRO!

In A Nutshell
I enjoyed this experience. I feel like I just got back from a trip to New York. Lol. Dare I say this shxt is classic?! Maan.. might as well… this is some of the best shxt I’ve heard in the Inland Empire thus far!.... What I really love about VLNSNVRDIE is that it gives me the idea that the “Good Guy” IS the Villian! & it’s got me thinkin’ how accurate that is nowadays… When you do right and use your brain the world wants to hate you.. Shxts backwards as hell.. Stevie…I feel you on this shxt. Keep improvin’ and grindin’…. Congratz! You should be proud….You can download a copy HERE
Flow/Lyrics 5/5