Review of The League's "Junior Varsity" 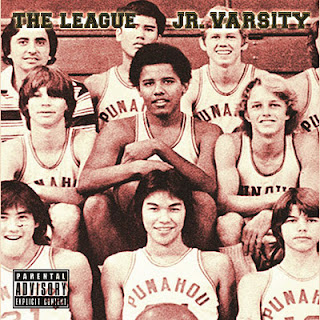 I was blessed with the opportunity to attend a hip hop show at The Glasshouse in Pomona, with some of the JooseBoxx.com crew, not too long ago. That night there was loads and loads of talent seen on the stage that night. Among them, one of my favorite performances of the night came from a two man rap group known as The League. Made up of rappers Phresco Cool & Johnny Wax, The League stood out with a strong sense of self from each rapper combined with a definite on-stage chemistry. To top it off, their music was accompanied by a live drummer who, in my opinion, woke up the crowd a little bit. I was excited when I got the email from my boss lady giving me their new project to review. So without further adieu let’s check out “Junior Varsity”. (tracks below might be out of order)

I’m already loving it. The music is real jazzy and I could definitely chill to this. The intro(or hook) sounds a little jumbled but that might just be the beat overpowering the vocals. Wish it stood out a little more. J. Wax goes into the verse killin it with his smooth style.


Ayo I’m too drunk to be up & not in some vaginaIts either call it quits or call this chick from Carolina
That I met last week. Let me see whassup
Ima try my luck. Hopefully she picks up.
Love the breakdown with the chick on the phone. It goes perfect with the concept of his verse. Very creative. Alright time for Phresco’s verse.

Girl you still in my house? The party been over.
No need to conversate unless you tryna bend over
Matter fact invite a friend over.

I must admit. When I heard Phresco on stage I was like man this man’s voice soundin’ crazy wild but I’m feelin how chill it sounds on wax. Good shxt. Love the outro. Good start!


Don’t Matter
This beat is dope as hell! I enjoyed the video for this track as well. J sped up the flow for this so I couldn’t really understand what he was saying but I started vibin’ once he slowed it down a little…. When he sped it back up it was easier to be on board with him this time. Straight verse. P. Cool’s verse is straight too!
LA nigga but you know that I don’t fuck with ratchetts
Okay I am lying but that if she got personal ASSets
Dope track. I think this was supposed to be after the whole project but like I said, I think the tracks are out of order. Whatever! What’s next.

Cool lil intro. Inspirational. Lol. Creative beat. Sounds like it was made by a rookie but ain’t nothing wrong with that. This shxt go lowkey! Perfect for a freestyle type track. Phresco not freestyling tho but it still goes well. I’m hella feeling Wax’s verse! Kinda reminded me of Kanye for a minute way he was goin’ in. Emotion was on point. Hmm short track. Okay.

This nigga talking bout some real shxt. Hella fast but I feel that man!..dope intro… BILLS!

Work hard just to pay off all of these BILLS
But the government keep on passing these BILLS
Just so brothers can’t stack these dollar BILLSMan I promise yall im sick of all of these BILLS
Dope ass hook. I know everyone can relate. Beat is simple but I ain't mad at that. I’m tryna hear what you sayin in these verses anyway! I LOVE Phresco’s verse! If this ain’t real idk what is:

School loans but I aint finish college yetHere so long now they callin me a college vet
Lookin thru the peephole tryna dodge the repoMe and Wax stealin from the Home DepotThe love of money is the root of all evil
The lack of money is the death of my peopleThe only way to escape debt is thru deathYou either give your last dollar or your last breath
For some reason I wish the beat woulda switched up a little for Jurassic’s verse but it’s cool…Woulda made it stand out a little more. I like this track.

Nice beat. Really futuristic chill party type shxt. Phresco’s voice soundin’ a little more like what I first heard. That’s cool with me… makes it original.I honestly hate the hook!! No disrespect, but I feel like the vocalist(Steph Jones) on it could have been a lot better. It almost made me press next but I wanna peep the rest of the track. Nice verse from Johnny. I see you! This track is straight….not one of my favorites so far though.

I like the title of this joint. Oh okay! I remember this because their drummer was goin’ wild during their performance! Reminded me of the Neptune’s… So you already know I’m vibin’! Shxt! All this track needs is Pharell on the hook and we’d have a hit!... Marsha did her thang tho! I like her voice. P and J both delivered solid ass verses on this joint. Definitely one of my favorites!
Junior Varsity

The intro for this joint is on some real shxt. I feel u J! Wack niggas always make it cause they got connections ::shrug:: I mean.. can’t knock the hustle but I still feel you.

They tried to cut me from the team, I told everybody I quit
I wasn’t ready to face that type of embarrassmentBut then I started thinkin, im prolly one of the best niggas that you got
More heart than every single muthafucka on yo squad
I like how P pointed out that Jordan got cut from his team too. Great example. This beat is cool. Oh I just noticed that the genre for this track and maybe the whole EP is “Cool AF” … hahah I see you.

How you put the best of the best on Junior Varsity?
Love To Give ft Ill Camille

First off! Before I even play this track.. *presses pause* Props on the Ill Camille feature! I’m a fan… she’s dope! Shoutout out to all the femcees representin! WOOT WOOT!.. alright my bad.. back to the music! *presses play* Love the sample! A personal favorite of mine… Nice flip! Drums are a little different tho…. But still chill enough for Phresco to spit on. Nice verse. Johnny’s vocals on this fit pretty damn well.

These 808s gon pay these bills & not these X’s and O’s
So its love lockdown and sorry I forgot the code
Alright here we go! Ill Camille!... Not gon lie…Kinda been waiting the whole track for this verse.. Sorry. Hmm Honestly… I think the drums on the beat kinda threw this whole section off. Ill Camille’s flow is a little different than what I’m used to hearing from her. Nice lyrics but I’m kinda disappointed. I’ll just blame the drums tho.

Play Through the Pain ft Marsha
Feelin’ the piano… & the concept of the track but somethings missing! Hmm not feelin’ Marsha on this hook….Soundin’ hella old school tho… Reminds me of uhh Tina Marie! ..maybe a little Chaka Khan..lol I think a more modern r&b singer on here woulda sounded dope… singing through the verses too! Woulda been nice. I like the skit at the end tho. Hella Inspirational! You gotta breathe success! I feel that…dope.

Rolaids & 7-Up ft. Name
Dope beat. Hella dope concept!
Damn I’m waking up to my head spinningThere’s throw-up on my bed linenA chick I don’t even know in my bed grinningIm addicted to the college life and college women
Phresco got the college life down to a T! I like the hook on this joint. It’s different!
My head spinning tooMy stomach is hittin them cartwheelsI would imagine this how abstract art feel
Feelin’ this verse from J. Wax
I never sweater (sweat her) if she give the whole crewneckShe gave me and my man the mouth that’s what I call a duet
Ha! Dope shxt J! Cool ass track…. I can relate. Lol

I would love to see a video to this song. If you could find a director who could be as creative as the story line in the track you could have a song that people dedicate to others. I hate the piano in the hook! WTH!! It’s hella off key.. Sorry… off key notes piss me off! Lol Blame “the ear” ….

Okay. Cool sample. Oh okay! I like this beat and J. doin what he does best….
Won’t stop till we reach the hall of fameThe League be out with model women , you be at home with the ball & chain
I like the beat concept.. goes along with the whole Junior Varsity theme… good thinkin! P’s verse is cool… Kinda wish it switched it up…That’s just my personal preference in songs.. I like hearing something different!
Winnin winnin! & that’s one hell of a feelin’ feelin’Aww yea we Undefeated!

Vegas Trippin’
This is the first song I heard from The League before I hit their concert that one day. I enjoyed their live performance of this track too. The beat is dope as hell! ….Shakin’ them dice up lol.. I like that… This track is hella cool

In A Nutshell:
I definitely see a future for these guys. I really hope to see them one day on MTV Jams doing hip-hop videos. The League reminds me of groups like Dilated Peoples and A tribe Called Quest but more Cali with it you know. I feel like the features took away from my enjoyment of the mixtape.. There were a couple solid ones but other features made pretty nice tracks skippable..." Overall I really enjoyed the tape and I am looking forward to the next project they release. I’d like to hear better production tho…I think that would take these guys from JV straight to Var! We’ll see if they make the team next time…