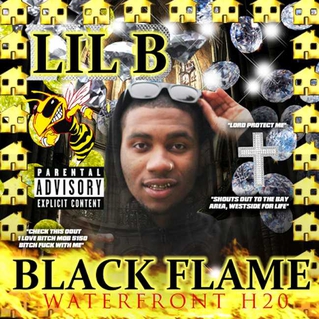 Last Of The Based World
I love this beat.. Drake killed the original... and I heard a remix by The Weeknd that blew my mind.Let's see what Lil B does with it! He would choose this. Lil B always on that calm zone out shxt. To know Lil B is to love him. What he does is poetry and what makes it so interesting is the fact that it's straight off the dome. Creative shxt. ::shrug::

Down 4 To Long
Aww maan! This is too good. I’m a big Lil B fan and this is some classic shxt for him. His flow is on time too which makes this even more enjoyable. This is the shxt you vibe to in the whip you feel me. Another thing I like about Lil B is the way he be spitting bout real shxt … He talks about the struggle, the community, the comeup. Haters only wanna focus on the fact that he has “Hoes on his dick!” and that ignant shxt he makes ,even with a purpose.

Yu Feel Me
I was gonna say in one of the last songs that lil B sounds like he was really inspired by Cash Money cause his flow always reminds me of something one of the 504 boyz would spit. Well this song sounds dead on like that shxt! He even shoutouts a couple of the Cash Money members. Shxt reminds me of Juvenile when he had that song called “Ha!” or whatever it was called..I just know that nigga said that after line lol. This that New Orleans shxt for real.

Real 100
This beat is on some Westcoast Horrorcore shxt. Man smh sometimes I think maybe I’ve been brainwashed cause I find myself actually vibing to this shxt just cause I love how different Lil B is and he reminds me of a lot of Oakland rappers too. I mean the obviously can work on his flow and timing but he sounds like he’s having fun and that’s what important. ::shrug:: *lights one*

Black Flame
When I hear beats like this the word “dissonance” comes to mind. The music doesn’t really go together but it’s so off it’s on. This nigga Lil B freestyling his ass off though …(but imma press next bout 1:34 into the track).

Ms Woman
Oh em gee! I love this beat! Wish I woulda made it… ::shrug:: Imma have to find this instrumental. Much respect to Lil B but I cant even listen to this cause I am jealous that I’m not the one on this beat! Weird? Idgaf! ::shrug:: what’s next!?

I Go The Hardest
I swear this nigga went and got some throwback beats from whoever was producin’ for Cash Money… Sound like BG and Birdman would be on this shxt. Oh! Mannie Fresh was the producer huh? I wouldn’t be surprised if this is a Mannie Fresh beat! I kinda tuned Lil Boss out cause I was listening too the beat but when I started listening again I lost interest. The hook on this is comedy tho. Lol

Fuckin With Da FiensLove the beat! This is like Old Skool WestCoast HipHop… on some Dre shxt!

"Niggas dyin in the hood over bitches"
I applaud Lil B for keeping the freestyles going but so far it’s boring me.

Im Certified
Another Cash Money Shoutout. Lil B is my age so I know this nigga enjoying where he is in life. & he did it by doing what the hell he wants. This song is whatever tho. Ha! Next.

Logged In
Wooo! Lol This the type of shxt I play to annoy my bestfriend.. #ClassicLilB


"Sip lean with the top off, fuck a bitch with the lights on"
Only thing I don’t like is all these new rappers thinking its okay to rap off beat. Smh. It’s not okay and only Lil B can pull it off. ::shrug::

Goldhouse
This is #swag music. *cooks* You know yo ass wanna “cook” too… Go watch an instructional video or something but if you see me in the street don’t ask me to do that shxt. I only cook during smoke sessions. Lol

Be A Superstar
I actually like the lyrics on this joint more than anything. Almost pressed next a couple times but I can relate to a lot that he’s saying. ::shrug:: He spit that real shxt as ignorant as his flow is.


"Vote Lil B 2013 President, I moved out the hood but I’m still a resident"
Durty Pop
Haha wtf! DIPSET!! Lol Lil B going in. Hands down one of my favorite freestylers. Hmm I wonder why Lil B’s quality is so ass tho… & he gets away with it cause it’s on some mixtape shxt! I feel.

Im In The Streetz
5150? Duh! You can tell this nigga’s mind is on some other shxt. Listen to this. It’s obvious.

I Forgive You
I don’t understand why this is on here if it’s from his “I Forgive You” mixtape. Haha! This nigga is comedy tho.. crying and shxt lol comedy! Love his lyrics on this shxt tho.


"I forgive you for your thoughts. It’s hard to see wisdom."
Yea Lil B you do need to relax. You working hard bruh! Nigga got shows in Poland and shxt!

Herd Her Cry
I love the beat but the song? Eh! not so much. NEXT!


“he wanna hit on her cause he scared to lose her”

Can I Live 4real
Love the beat. He better go in!

“Imma hit you uh. I aint talking gay bash but I kill you faggots”
Sheesh. He just took a jab at a “jerker” tho. Wonder who! I wouldn’t mind riding to this. I always seem to zone out listening to this Boy… can’t remember shxt he said but I be vibin’… I don’t even know how to explain.


“If you got a question scream yeah yeah yeah. Don’t know why I was born into hell. Feel my pain.”
Lil B speaking some real shxt on here but the flow makes me not wanna listen. I feel this nigga tho. Lil Boss be preaching to these niggas & I feel you on everything you saying. I forgive these niggas too bruh! They know not what they do!

Take A Picture BasedGod
Ay! Some “ignant” shxt! Love it….

In A NutShell:
Hmmm … well. Lil B. You either love him or you hate him. I love him. End Quote. You can download "Black Flame" HERE